THE SUFFOLK AT AMPTON – REPORT & RESULTS

On a day when the forecast, strong winds never really materialised, horses from two leading stables stormed up the Ampton run-in, on Sunday, to dominate the afternoon proceedings at the Suffolk Hunt meeting. Local trainer Andrew Pennock saddled four winners and Alan Hill from Oxfordshire was responsible for the other three successes on the seven-race card.

The fact that Andrew Pennock and wife Ruth have their stables at Timworth, adjacent to the course, does not give them any divine right to have winners so close to home. It is down to their meticulous training methods geared to the fitness of the horses and expert placing of their runners, within the fixture list, that pays dividends. They transported six horses to the course and came home with four winners and two second places, as the afternoon progressed. Stable jockey, Richard Collinson, rode all the horses and had his best-ever return when landing the four-timer.

The day started well for the Pennocks when This Breac comfortably saw off three rivals in the Conditions race. Knockedoutloaded tried to match strides with This Breac for nearly two circuits but fitness told and the winner was 12 lengths clear of all rivals, at the finish, with Knockedoutloaded pulling up before the last.

Chapelier became the Pennock’s second winner of the day when making it three wins for the season in the Intermediate race. Owner John Whyte will be very happy with the way his recently acquired purchase jumped with efficiency and “will leave the main man (his trainer) to plan the next outing” before a possible tilt at a hunter ‘chase at either Cheltenham or Stratford. 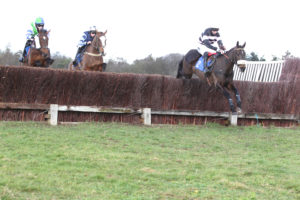 The third success came with Laser Beam in the Restricted race, who had impressed when winning his Maiden at Higham. Collinson had the 6-y-o contesting the lead throughout with Age Of Heroes and with his market rival Platinum Ben stalking the front two and covering their every move. However when Jack Andrews made his move on Platinum Ben, this was easily repelled by Laser Beam, who went on to win by 12 lengths. 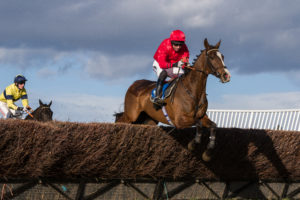 The five runner Open Maiden produced the biggest field of the day and it gave Farran Dancer a chance to prove his potential after he had failed to complete the course on his two previous outings, at Cottenham. In this race Richard Collinson took the lead, going out on the final circuit, with a mighty jump at the open ditch and stayed on strongly to hold Bobba Benetta by 2 ½ lengths, at the finish. 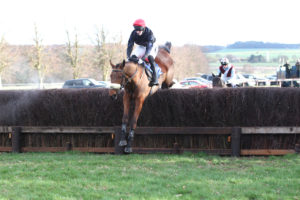 Laurium showed his class when easily defeating his only rival Sa Kaldoun in the Ladies Open. Izzie Marshall had the ride and was delighted with ex- Nicky Henderson inmate’s performance. Izzie rates the 9-y-o as high class who has started to enjoy his jumping again and was “always running away with her” during their facile victory. 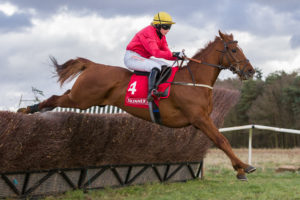 The concluding Hunt race went to the Mr. Hill trained, Stage One, who is owned and ridden by Daniel Cherriman. Daniel, who is a professional huntsman with the Pytchley Hunt, was completing a memorable week which saw him ride his first winner of the season at Godstone last weekend and become a proud father of a baby boy, his second child, during the week and this was his third career win. Quite a week for Daniel. Quite a day for Alan Hill, part of which had tragic consequences. Broken Eagle who was trained and part-owned by Alan, with Jake Exelby had won a titanic duel with Chosen Rose for the Mens Open prize, which resulted in a 12 length victory. This was the 19th and sadly the last career win for the outstanding gelding as he suffered a heart attack and collapsed and died when being un-saddled in the winner’s enclosure. Heartbreak for the connections but if there is any consolation in these terrible circumstances was summed up by a valid comment from one of the shocked and sombre crowd. 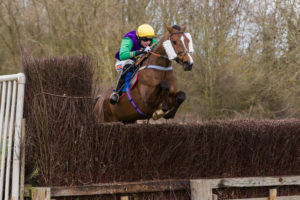 “At least it was fitting that his life ended in the winner’s enclosure, which he graced so many times during his wonderful career “ RIP BROKEN EAGLE

During the meeting two awards were made for different achievements. Richard Collinson won the Hugh Hodge Memorial award for being the leading jockey at Ampton, this season. Brian King was presented with gifts to mark his retirement as Secretary to the Suffolk Hunt. Brian first took up the appointment in February 1991.