REPORT- THE SUFFOLK AT AMPTON ON SATURDAY MARCH 5th

The performances of three young female jockeys brightened up the dismal and damp conditions experienced at the Suffolk fixture held at Ampton, near Bury St. Edmunds.

Ellie Callwood, Mary Ashby and Natalya Irvine all displayed high quality execution of their embryonic riding careers, which bodes well for the sport in the coming years.

Ellie Callwood, having narrowly been beaten in the opening event went one better by winning the next contest, the Intermediate race, on Precious Bounty who was completing a third consecutive win for the partnership, this season.This was another improving performance from the 8yo who made all the running and had a very comfortable 6 lengths advantage at the finish over Fiddler Of Dooney. 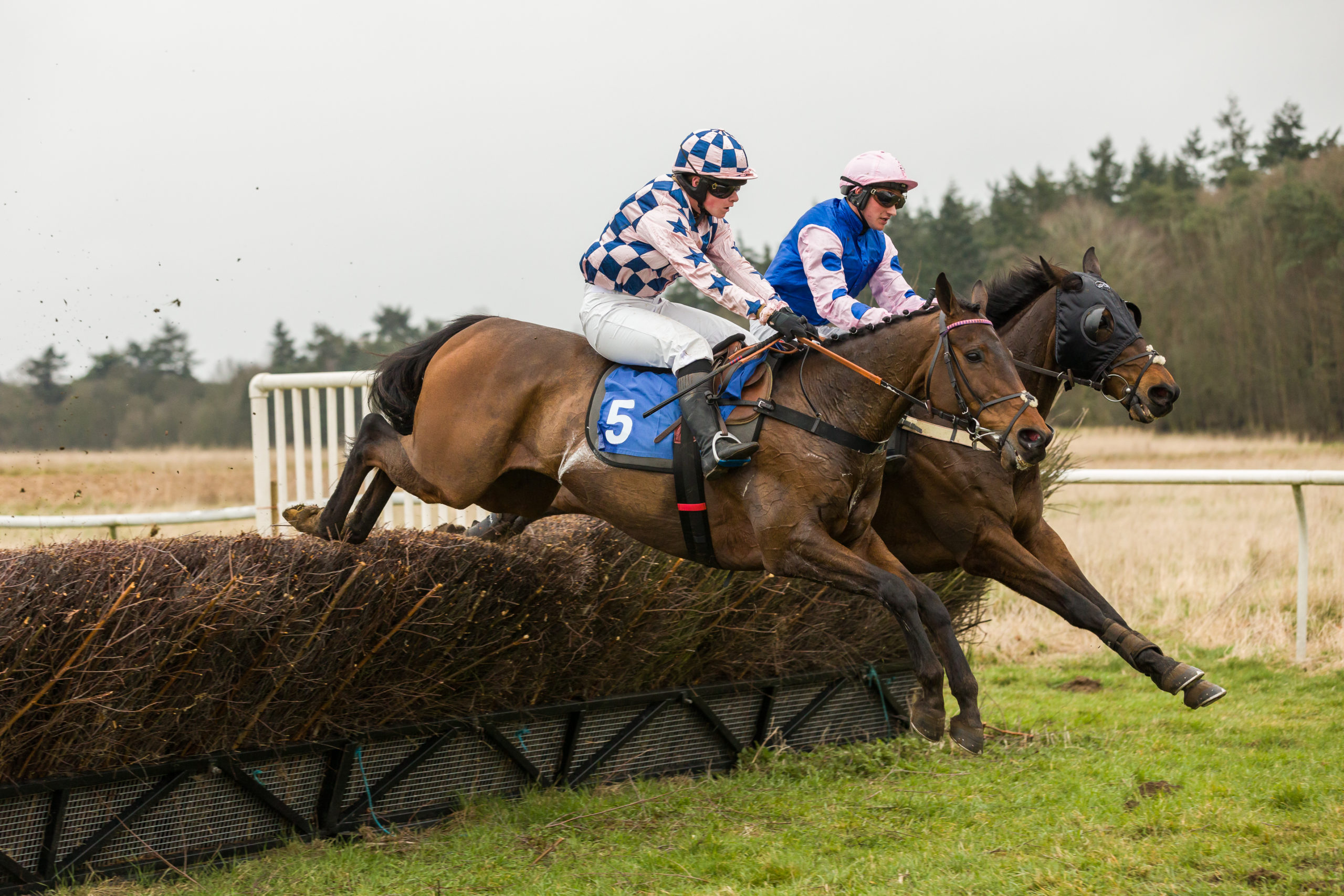 Precious Bounty and Ellie Callwood ( nearside) getting the better of Fiddler Of Dooney ( Alex Chadwick) in the Intermediate race.

Ellie’s narrow defeat came on Wounded Warrior, by 1 ½ lengths to Myplaceatmidnight in the Veteran Horse Conditions race. Sent off the odds-on favourite, after their win in a similar event in Yorkshire a month ago, Ellie was at work, bumping along Wounded Warrior with two circuits still to go. However, going to three fences out there were three in with a winning chance but the eventual winner continued to jump boldly and stayed on strongly up the hill to take the prize.

Ellie’s mother Joanne who owns both Precious Bounty and Wounded Warrior had made the long trip down from Cheshire, calling in at trainer Tom Ellis’s Rugby yard to collect the horses and drive on to Suffolk. The return journey via a similar route awaited Joanne, who comes from a show jumping background, and is extremely proud of her daughter’s achievements to-date and is delighted Ellie is learning all the time, by being part of Tom and Gina’s set-up.

Ellie’s win took her into the lead for the National Novice Rider’s title with four wins but this was immediately matched by Natalya Irvine in the very next race, the Ladies Open. Another training success for Tom Ellis who must also be enthused by the very friendly rivalry of Ellie and Natalya who are both enjoying the opportunities afforded to them by working at such a successful training operation. Natalya and Blazing Tom just keep on rattling up the victories and they completed their third win of this season and their seventh consecutive success when comfortably drawing clear of their rivals in the Ladies Open race. This win for Natalya, to add to the two winners she achieved at the Ampton January meeting, secured her the Hugh Hodge Memorial Trophy for the leading rider at the course for the season. An early career memento for a young rider who continues to gain a wealth of experience with every ride in the sport. Similar to the January fixture at Ampton, Natalya,  had support from her family who had made the trip down from Yorkshire and Dad Steve, owner of Blazing Tom, together Mum Gaynor were on hand to accept the Greene King Challenge Cup for yet another victory for the 11yo Blazing Tom.

Kent based, Mary Ashby, secured her second career win on Monkey Puzzle, trained by her mother Sarah. “ Such a sweet horse ” being the description given about her winning partner of the PPORA Novice Riders’ race. This former inmate of Oliver Sherwood, won two races under NH rules and all the detailed attention with Monkey Puzzle before and after the race was undertaken by Sarah, so when it came to the prize presentation, she was already leading the horse back to the horsebox area. Young Mary, therefore, stepped forward and accepted the owner’s trophy on behalf of Mum, in addition to the donated prize for the winning rider. 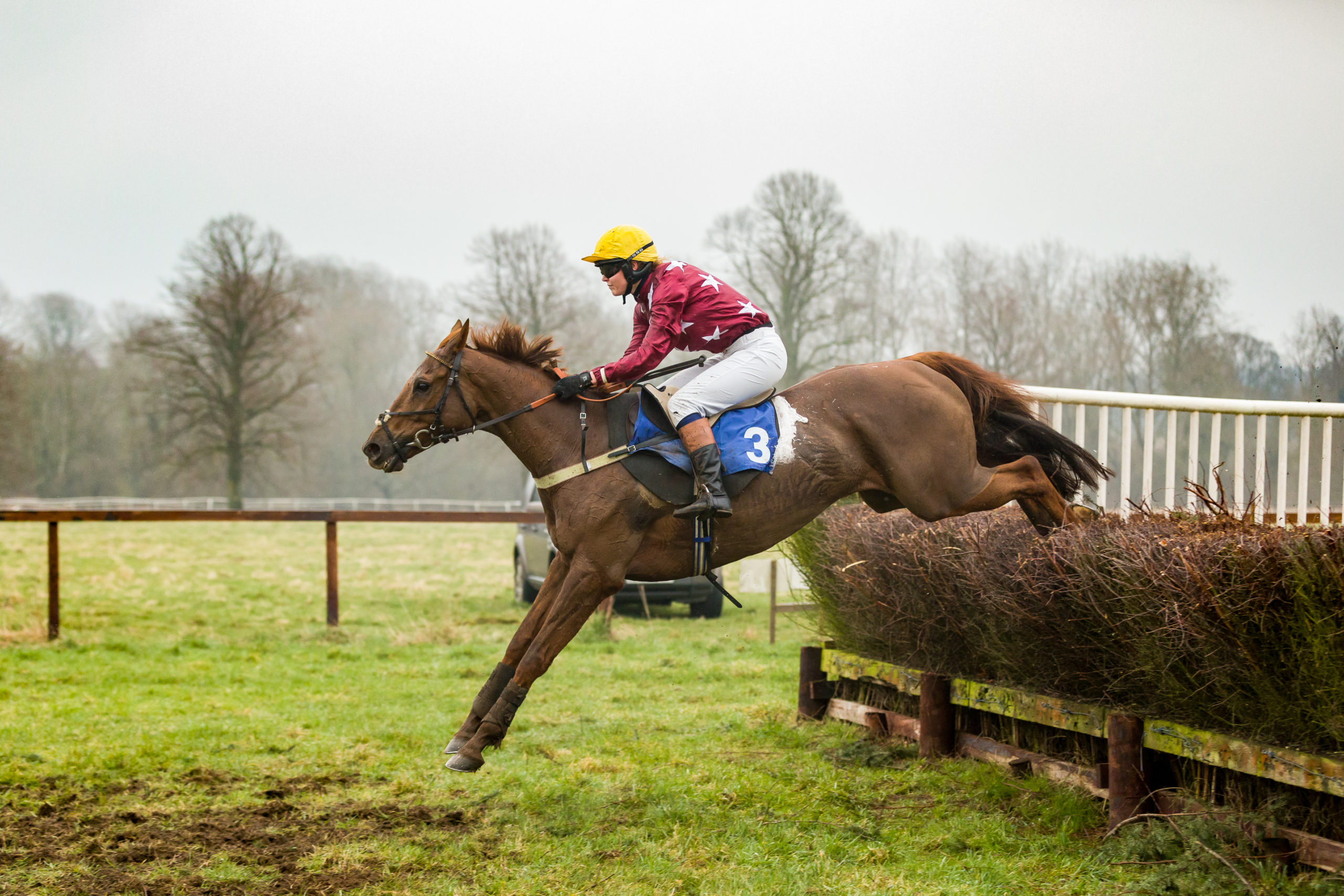 Monkey Puzzle and Mary Ashby soaring their way to victory in the PPORA Novice Riders’ race.

Harry Myddelton and Charlie Buckle made sure the younger male element of the weighing room were not left out when they also made their way into the winners’ enclosure after victories on Highland Glory (Open Maiden ) and Myplaceatmidnight ( Veteran Horse Conditions) respectively.

Harry is currently studying for a degree in Real Estates at Oxford Brookes University which allows him to ride out at Alan and Lawney Hill’s establishment, several times a week. He also has a connection with Donald McCain’s stable which gives him more opportunities to gain experience whilst undertaking his studies. In the Open Maiden race, which had the biggest field of nine on the day, going to three fences out there were still eight horses with a winning chance. Not for the first time at Ampton, the uphill finish and faced with the last two fences, many a winning chance has disappeared in a matter of seconds. Here though Harry delivered Highland Glory, owned by his father and trained by Alan Hill, at precisely the right moment and was able to push his mount out, to gain a 3 length advantage over Friary Land to give Harry his eighth career victory. 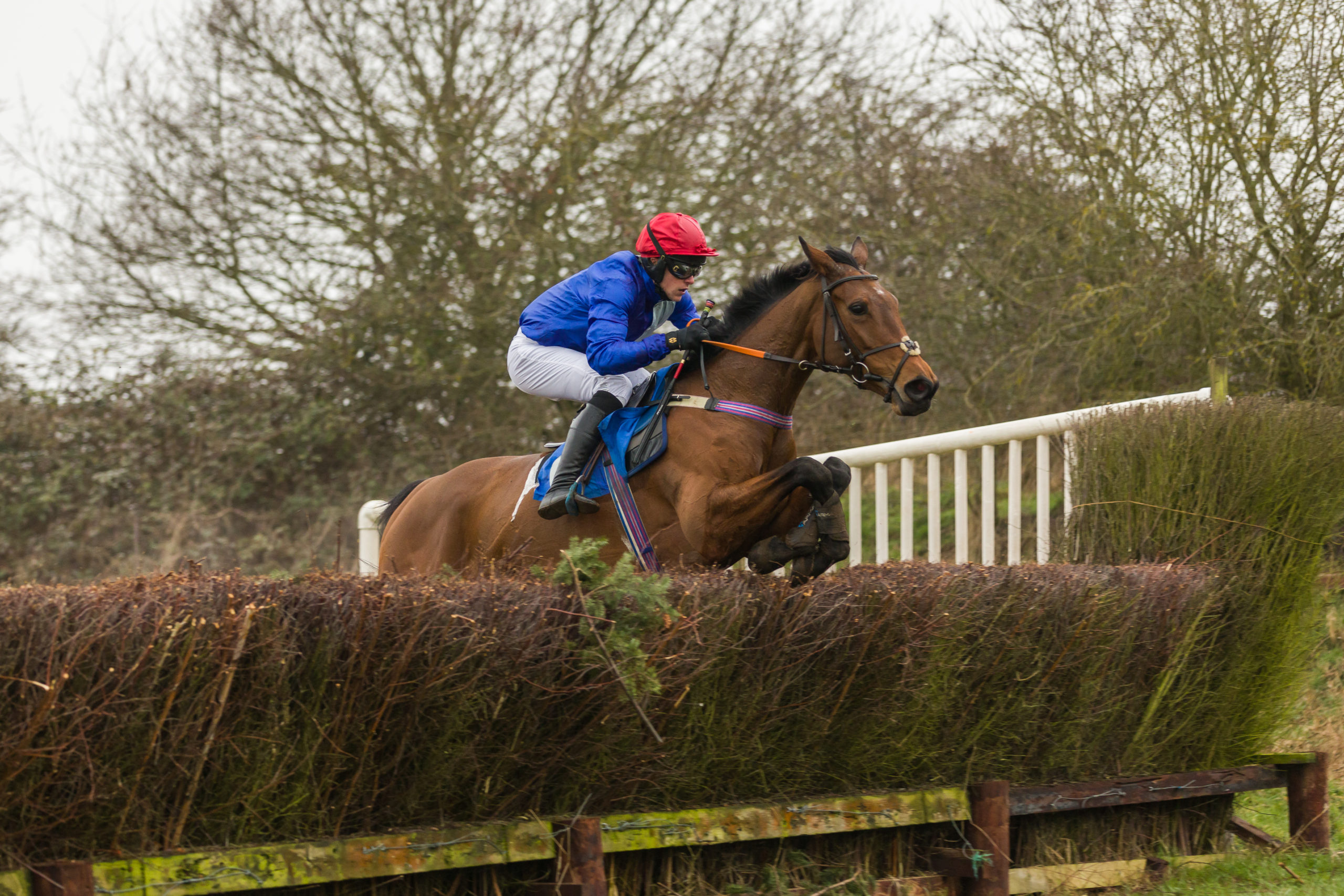 Highland Glory and Harry Myddelton on their way to the Open Maiden race success.

Charlie Buckle’s colours have been a regular sighting in the winners’ enclosure this season and in the opening encounter, the Veteran Horse Conditions race, Myplaceatmidnight caused an upset, having improved to turn the tables on Wounded Warrior since they met at Charing, a month ago. The home-bred 10yo, who ran under rules with Neil King, jumped with a great deal of enthusiasm coupled with the utmost vibrance from the saddle which was enough to bring about the victory at odds of 12/1. 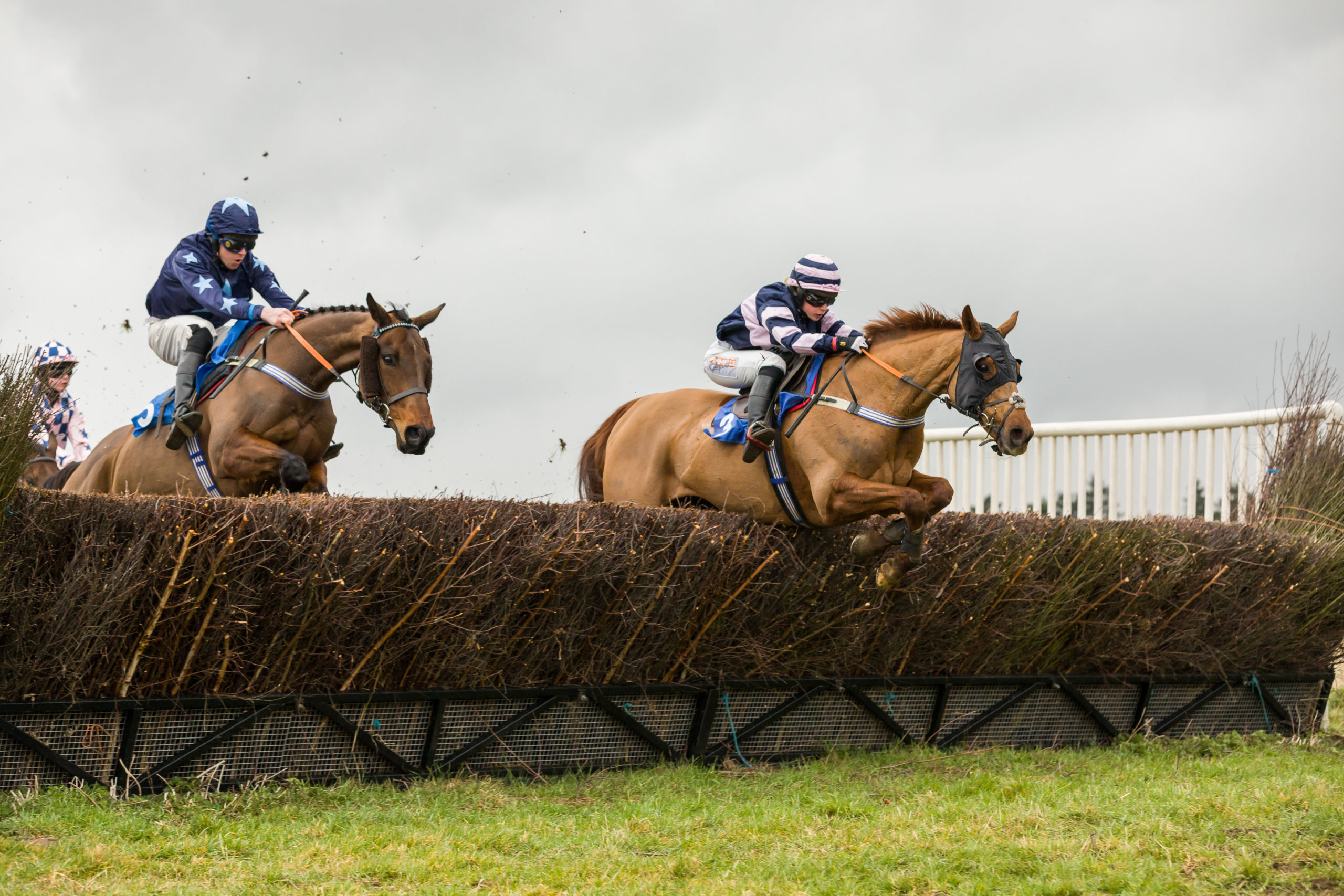 On an afternoon when the younger jockey fraternity may have stolen the headlines there was still room for two of the more mature, experienced riders to show they haven’t lost their winning ability. Multiple national champion Will Biddick guided Tullys Touch round the Ampton course to beat their solitary rival in the Mens Open race. 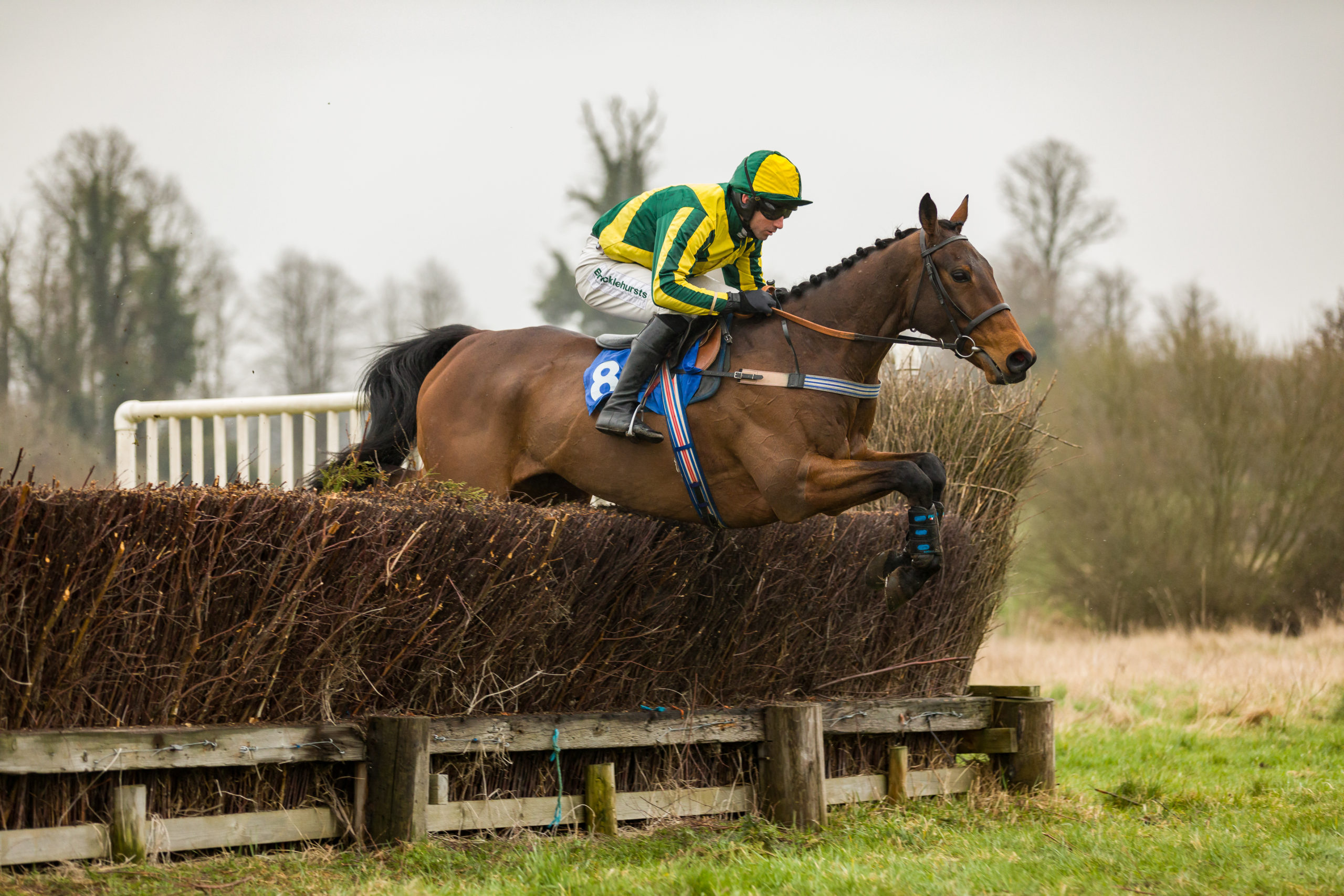 The concluding Hunt Members’ contest was won by the admirable grey, Midnight Cowboy, with Rupert Stearn aboard adding to his career total of winners, which is already in excess of one hundred. 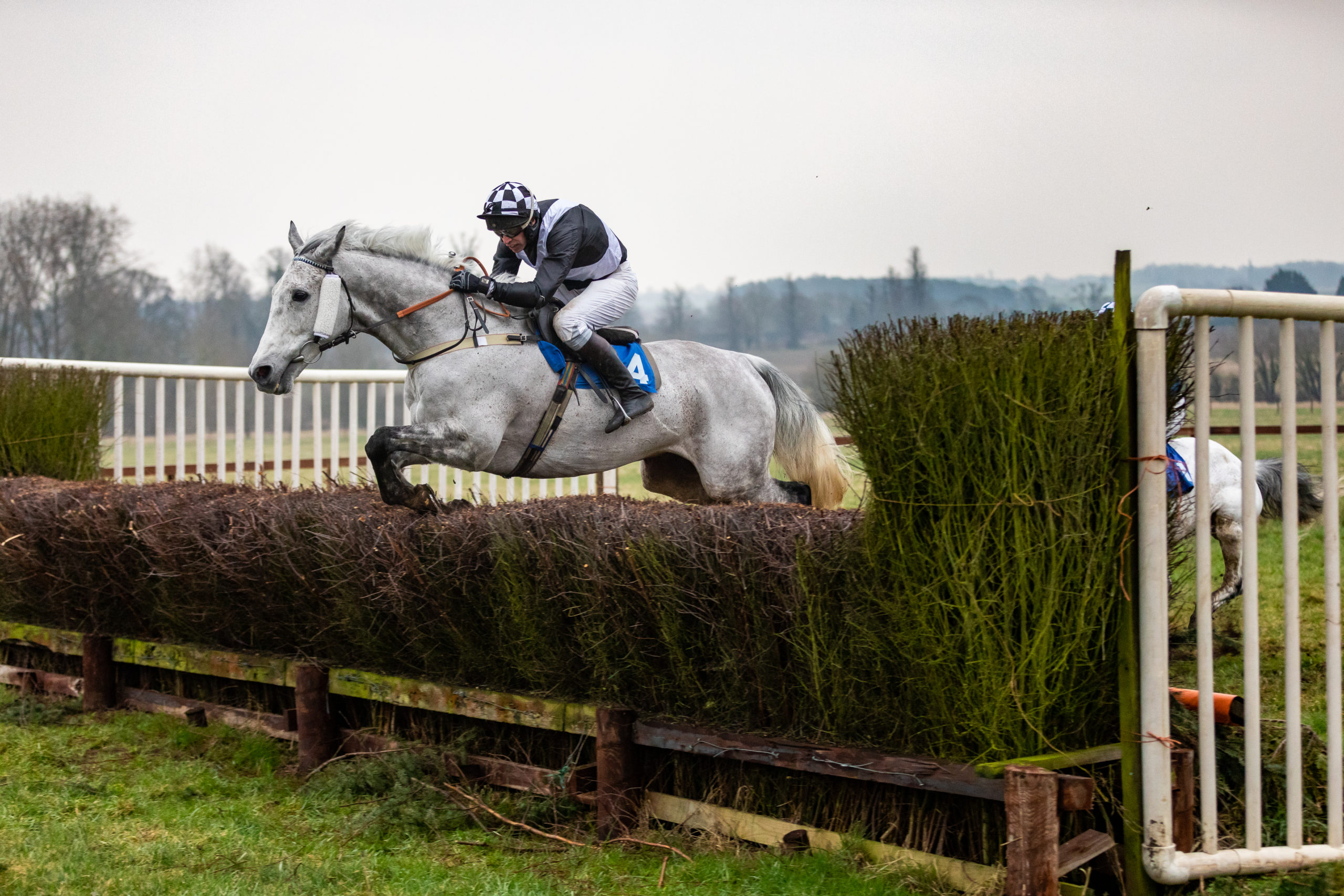 There was a special and well-deserved presentation, during the meeting, to retiring Suffolk Hunt secretary Suzanne Webb after several seasons of sterling work.