Odds-on favourites, Just Cause and Southfield Theatre won their respective Mens Open and Ladies Open races with similar front-running displays at Higham on Sunday. Their future race plans, however, differ as the season progresses.

Just Cause and Rupert Stearn won their fourth race of the season and the 10yo is now the leading horse, nationally, for the number of wins achieved in this current campaign. The plan is to be entered in similar races around East Anglia with a possible Hunter ‘Chase being targeted later in the season. Exciting times, ahead, for the Stearn family with this purchase and only the only blemish, on this performance, was a final fence blunder. 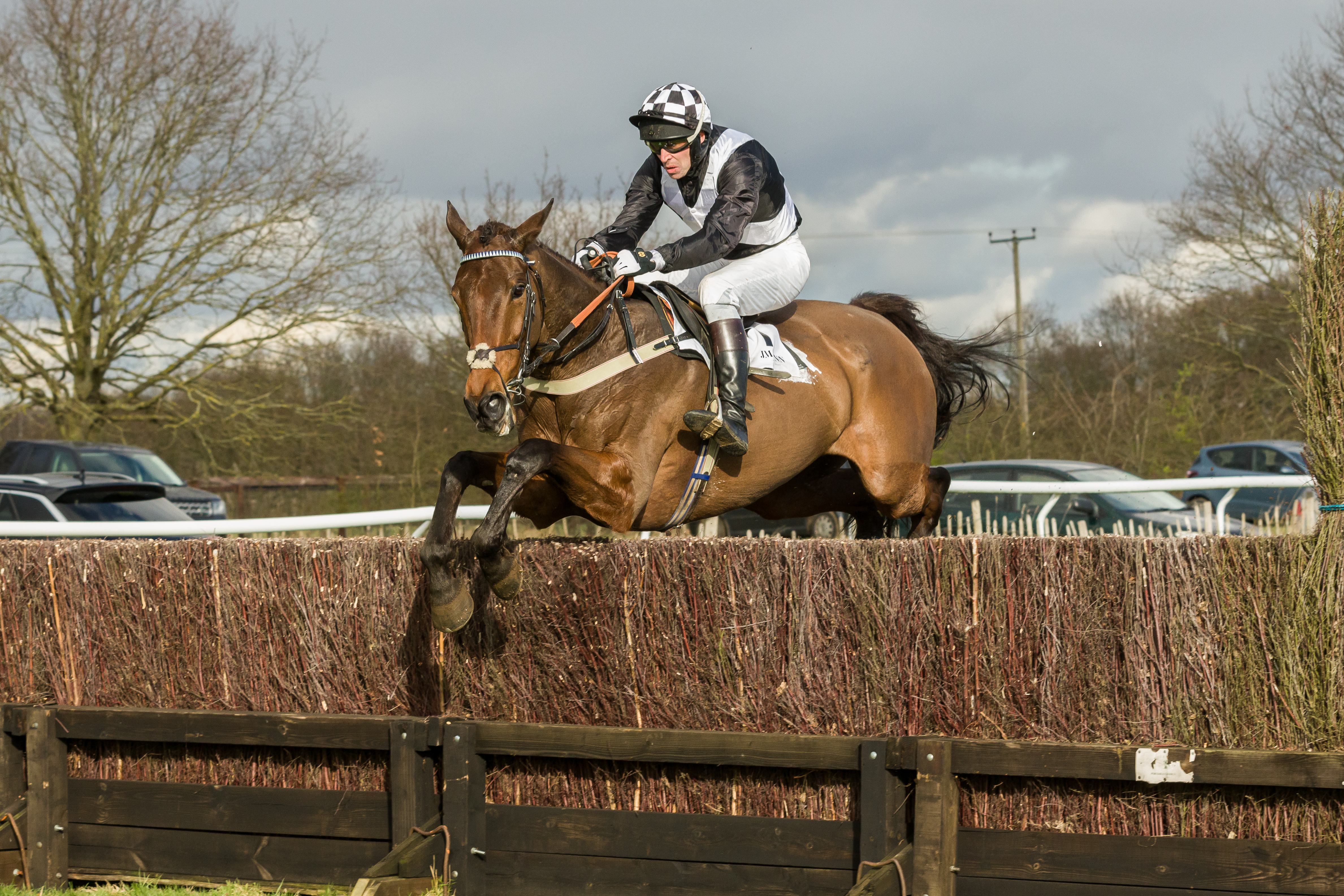 Southfield Theatre made the journey from Wantage and with regular jockey Lily Bradstock aboard, they never looked in real trouble, throughout their race. They will head to the Cheltenham Festival Foxhunters, next month, hoping to repeat their course win at the prestigious track, last May. Here, the pairing were briefly challenged for the lead at the cross fence, four from home, by three other rivals but Lily admitted post-race “he is lazy and will do just enough” but she felt it was a very good performance overall. The winning distance was six lengths from the Gina Andrews partnered, Ain Scairp. 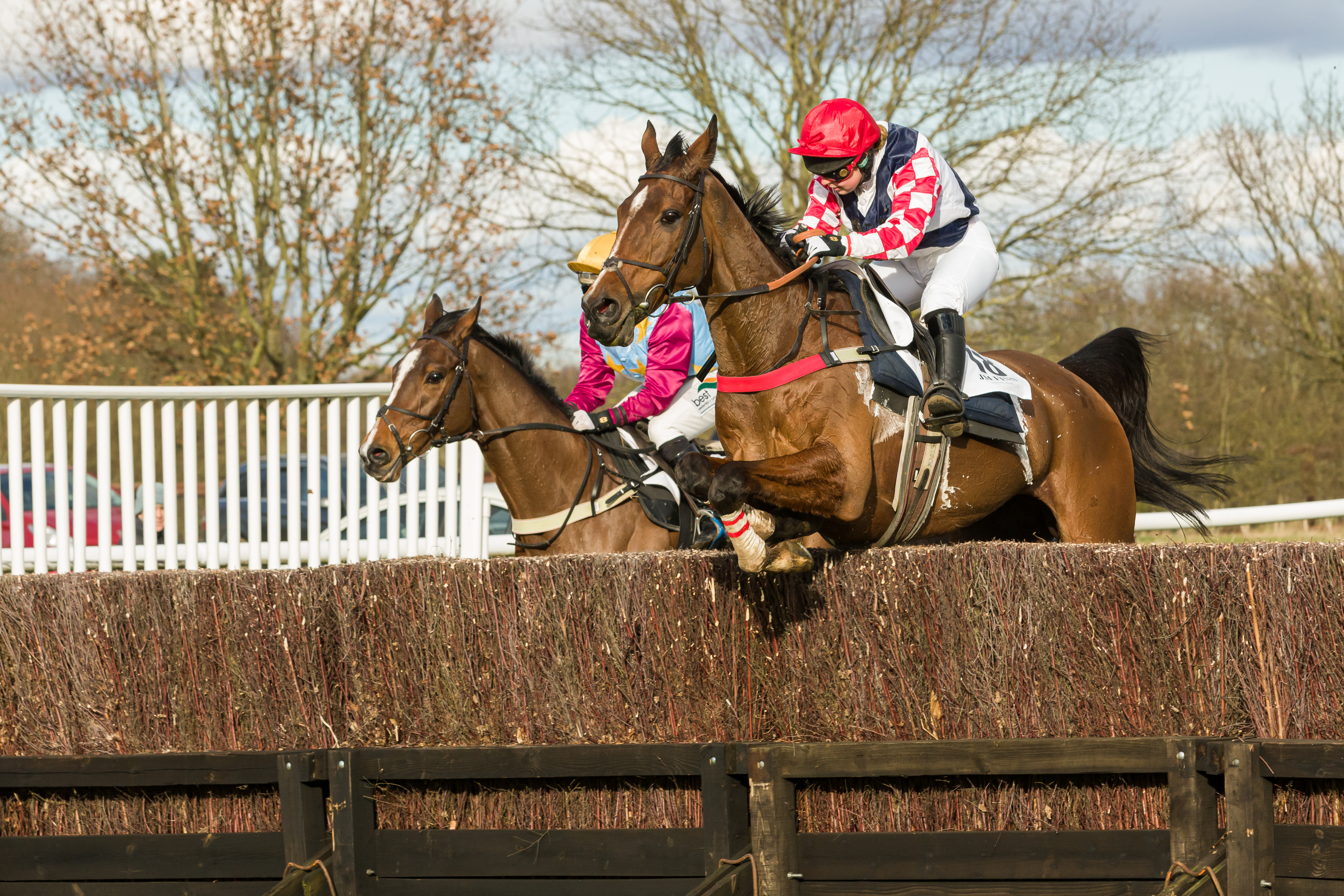 The ‘good to soft’ course conditions and strong headwind up the finishing straight may have affected some races, more than others. Two race winners came through the field to catch leading contenders between the last two obstacles. The opening Hunt race saw Laser Beam and Alice Stevens make late progress to collar Knight Bachelor, the front-runner, and win by two lengths. Alice Stevens was contacted for the ride by sidelined Dicky Collinson, who it appears, has further injuries than was first thought after his crunching fall at Cottenham. In her first ride for trainer Andrew Pennock, Alice stated that Laser Beam had found his rhythm late in the race hence their belated entry on the scene and the trainer also confirmed that the 7yo had suffered a form of whiplash in his last appearance, when pulled up here, which required subsequent muscular therapy. 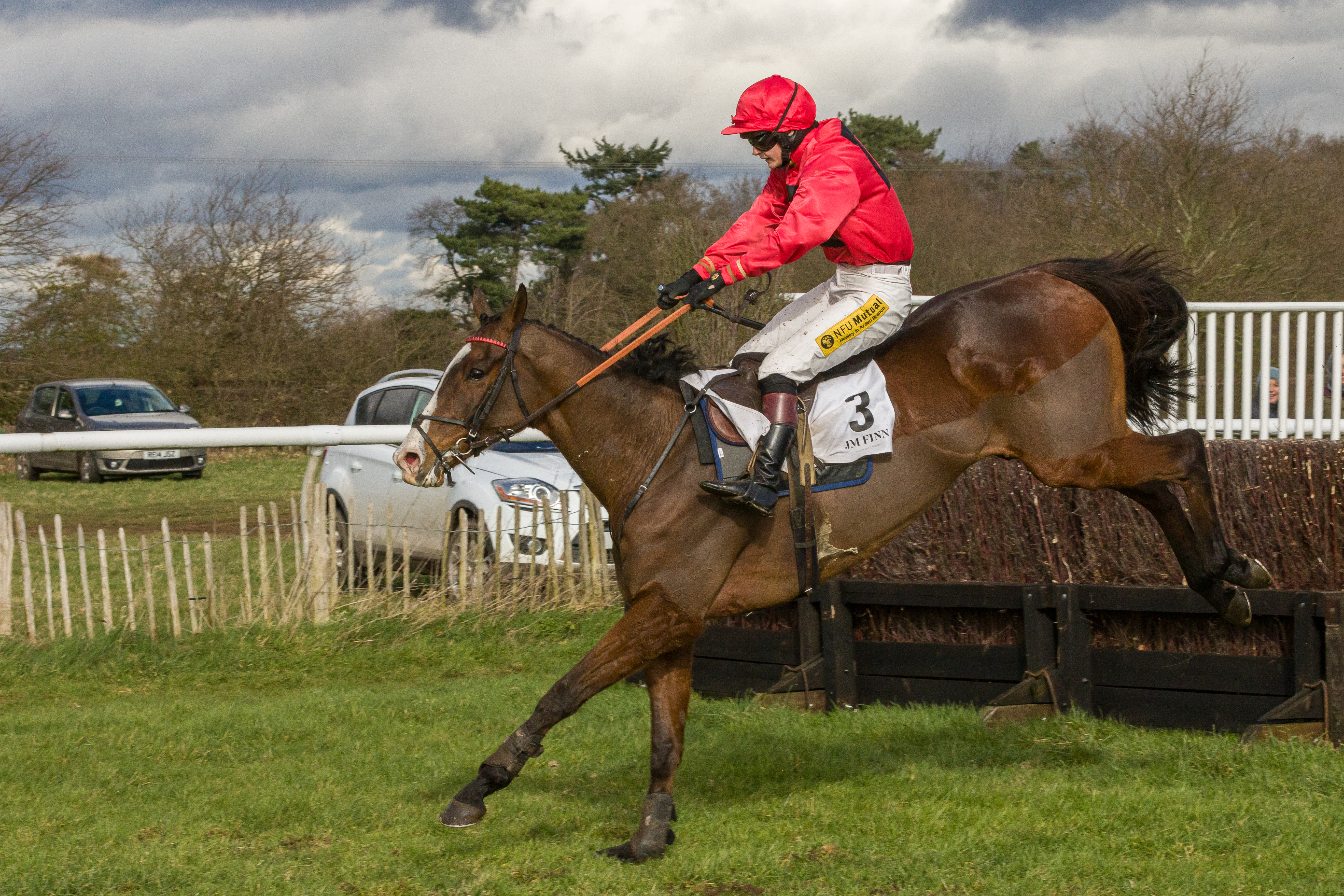 In the Open Maiden, Gina Andrews allowed Tekap to sit behind the leaders Ballinagore and Fiddlers Tracker, going out on the final circuit before producing their winning effort to see off long-time leader Ballinagore, by a six length margin. This was the first time Gina had sat on the ex-Henry Daly 7yo and was keen to make up to owner/trainer Nick Wright, for a “rein entanglement issue”, at Charing, the previous day, According to Archie Wright, who would have been aboard and is recovering from his Cottenham injury, the credit for the gelding’s performance is down to Paddy Gerety who has been actively involved in his preparation. Again Archie’s Cottenham injuries turned out to be more severe than was first thought, now needing to recover from a pinned, broken shoulder blade as well as a collarbone break. Archie hopes to be back in 6-8 weeks. 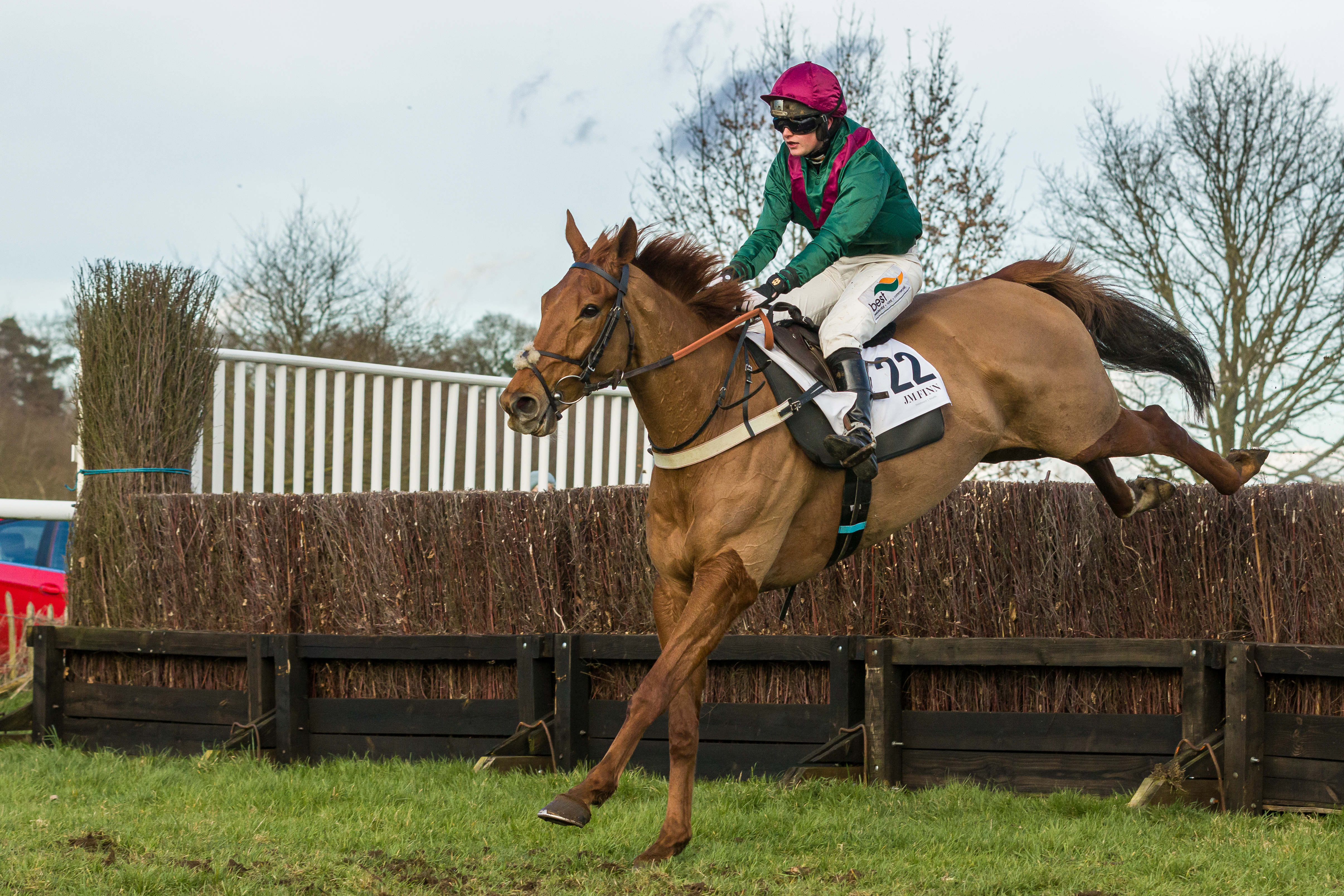 The Gunner Brady recorded his second, Higham career win in the Condition race with Izzie Marshall, a late replacement in the saddle, to win the battle up front against Can Mestret, with the favourite Early Retirement a faller, five fences out, after some sketchy jumping. At the prize presentation Izzie was thankful for the chance ride and over the final stages of the race was fearing the worst when “ Gina came upsides but he took a hold and went on well” She also commented on the ground offering that although it was softer than normal at Higham, it was lovely, safe jumping ground. 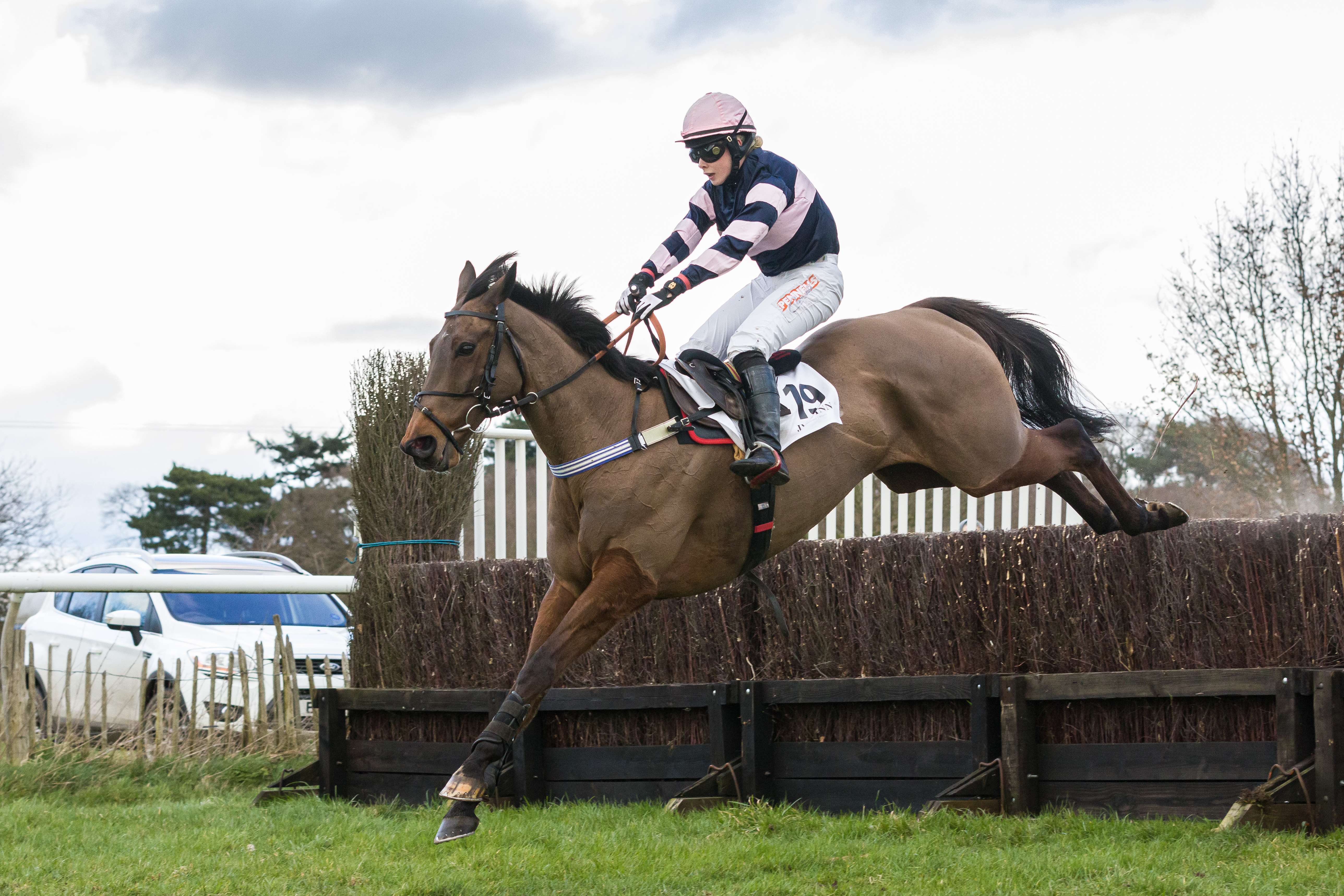 The Gunner Brady and Izzie Marshall winners of the PPORA Conditions race.

The concluding Restricted race saw a tight finish between brother and sister, Jack and Gina Andrews. Barrack Hill and Oscars Fame made the running heading over the first circuit with the former taking the lead as the field went out in the country for the final time. As the field approached the final three fences Hard Ground and Oscars Fame had pressed on and it was here that the favourite, Fiddler Of Dooney fell leaving the Andrews siblings to tussle for the ultimate prize. Jack took the honours on Hard Ground, by two lengths from Oscars Fame. Jack and is currently 2nd in the male national jockey’s championship whilst Gina leads the female equivalent contest. 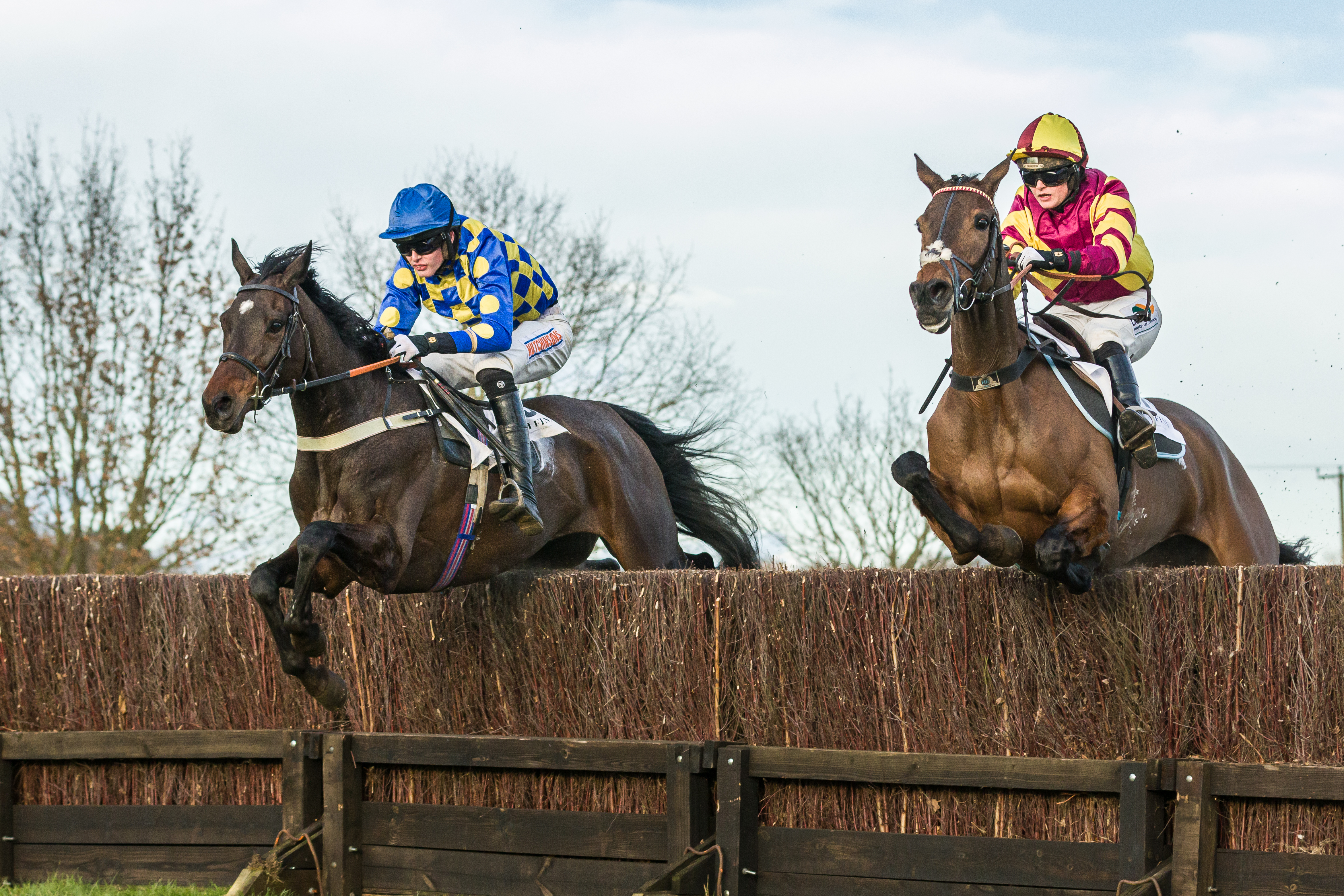 Gearoid Costelloe, Hard Ground’s owner/ trainer, journeyed from the Marlborough area to pay his first visit to Higham and thoroughly enjoyed the day’s experience. The journey, the ground conditions and his 6yo’s performance. Other visits to East Anglia are in the planning, as a result of Gearoid’s awayday success.

A highly enjoyable day’s racing with a competitive edge to the contests and a total of 43 runners on a breezy, sunny interval blessed afternoon.

Here are the results for the Waveney Harriers meeting held at Higham. The official going was good, good to soft in places.