What a start was witnessed at the opening meeting of the new point-to-point season, at Cottenham. Perfect ground conditions, beautifully presented fences and some exciting racing with close finishes and 41 of the 44 individual horses entered, turning out on the day.

Right from the start, the opening Condition’s race saw 15 of the 16 entries contest the 2 ½ mile event on ground conditions which would have to be considered, as probably, the best seen at the course for several seasons. Undisputed represented the powerful stable of Philip Rowley, who trains at Bridgnorth in Shropshire, and made all the early running in a hotly contested race. A possible contender was Hawkhurst, who was made favourite at the off, but un-shipped Izzie Marshall when appearing to “prop” soon after jumping the fourth fence. Undisputed was still heading affairs as the field streamed round the final bend and it was here that the leader came under strong pressure from Workbench. They jumped the last obstacle upsides but as genuine as his name suggests, Undisputed and Alex Edwards retained their lead and held off the challenge by half a length. Praise must be given to Murray Dodd, who was having his first ever ride on Workbench for going so close. Murray works for Dan Skelton and arrived about eighteen months ago without any experience of race riding. Having never even been involved in pony racing this opportunity was presented to him by Workbench’ s trainer Nick Pearce, also a Skelton stable employee, as a reward for the all the hard work, endeavour and commitment shown in the yard. Obviously not mis-placed, if this performance was anything to go by. 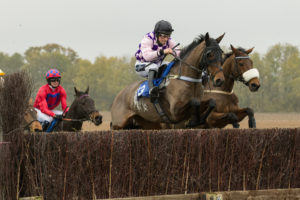 A quick double looked imminent for trainer Rowley and jockey Edwards when Now Ben took his chance in the following Men’s Open. However the favourite was denied a fifth course success by his stable mate Vivaldi Collonges. The ten year-old was with James Owen’s Newmarket stable last season but as his young jockey, Ben Bromley, now rides out daily for trainer Rowley a switch of stables was effected.

Ben, who turned just seventeen a week ago, is the son of Vivaldi Collonges’owner Anthony Bromley, a highly respected bloodstock agent and racing manager. 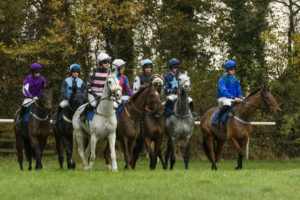 Ben rode the horse to two victories last season but young Ben didn’t finish the season on a happy note as he was deposited, on the way to the start of a race and broke both thumbs. Ouch !! . The horse was purchased from leading amateur David Maxwell, who won Hunter ‘Chases on him and that is the route the Bromley’s are likely to follow as the season progresses. Anthony, co-incidentally, was also responsible for purchasing the horse from France, for leading owner John Hales, in its early days. Meanwhile Ben is still eligible to ride in novice rider’s races as this was his fourth winner and pleasingly his first in East Anglia, as his family live in the Newmarket area. Previously Ben rode for several seasons on the East Anglian pony scene and is now reaping the rewards of the valuable knowledge gained from this experience. Alex Edwards, although missing out on a second winner, was philosophical in defeat stating that Now Ben had given him everything on the run-in but just missed out with victory going to another in-mate of the Rowley stable.

The Ladies Open race saw an upset when the odds-on favourite Arthur’s Secret was taken on by the heavily backed Ravished, an eleven year-old gelding trained by irrepressible, Joseph O’Shea. His horse took up the lead from the favourite with a fine jump at the final open ditch and with Immy Robinson in control from the saddle, the pairing never looked like being caught and won by a distance to the delight of his trainer and gloom for the bookmakers. Ravished had been backed from 5/2 into 5/4. 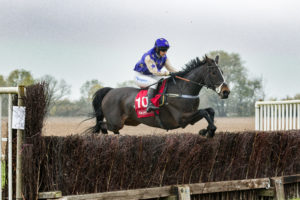 The six-times National Ladies Champion, Gina Andrews opened her winning account when Fox Valley easily outjumped her two rivals in the Restricted race. Three of the  four entrants faced the starter and this was a pleasing debut for the mare’s new yard. Tom Ellis has now taken over the training of the Signy and Marriage families, six year-old and it was good to see Lauren Braithwaite there to witness the accomplished performance by her former in-mate. 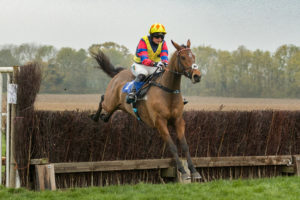 Gina’s brother Jack also visited the winner’s enclosure in the concluding younger horse Maiden contest on Fumet D’Oudairies whilst Will Thirlby rode his first Cottenham career winner on Frank And Honest in the preceding three mile Maiden race. This three mile Maiden provided the tightest finish of the day with just a length separating the first three home. Frank And Honest tackled the long time leader Taboo over the last two fences and stayed on strongly up the Cottenhma run-in to hold off Phoenix Park with Taboo back in third place. The winner was given a perfectly judged ride by Will Thirlby who rides the horse on a regular basis in work and was confident of the mare’s fitness. 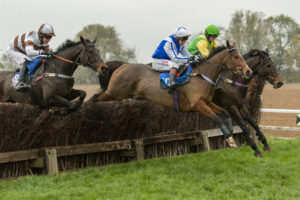 The noisiest reception for a winner was reserved for the last race victor, the four year-old Fumet D’Oudairies, who was greeted with infectious enthusiasm by members of the Ice and Slice Racing Club. Jack Andrews was delighted to have ridden a winner on the opening day but equally buoyant as he had been directly involved, with his sister Gina, in the purchase of his winning mount. Having paid under £1000 for what at the present moment is some prospect with a future, brought tremendous pride to Jack. 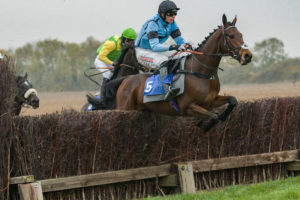 If enthusiasts needed any encouragement, the action certainly didn’t disappoint. The only downside is we have to wait six weeks before the next East Anglian meeting, back at Cottenham on Sunday December 29th

Cottenham was certainly the place to be, after eleven months since the last meeting there. Can’t wait for that next fixture.

Here are the results for the Cambridge University United Hunts Club meeting held at Cottenham. The official going was good.