The excellent weather enjoyed at all previous meetings this season deserted Horseheath racecourse, as persistent rain, throughout the afternoon, caused course conditions to deteriorate.

Soggy racecards recorded many of the races having a limited number of finishers with the testing conditions taking their toll. The Maiden race saw 12 runners face the starter but at the conclusion of the contest only three completed the course. Mr. Vango, partnered by Will Biddick, kept on galloping best through the mud to get the better of Santos Blue and Bradley Gibbs. Both jockeys are currently locked in battle for this year’s national male rider’s championship and this success maintained Biddick’s current lead. “Always worth the journey from Somerset if I ride a winner” commented the winning jockey and Mr.Vango, trained by Chris Barber at Littlewindsor in Dorset, looks capable of plenty of improvement, after this performance on his racecourse debut. 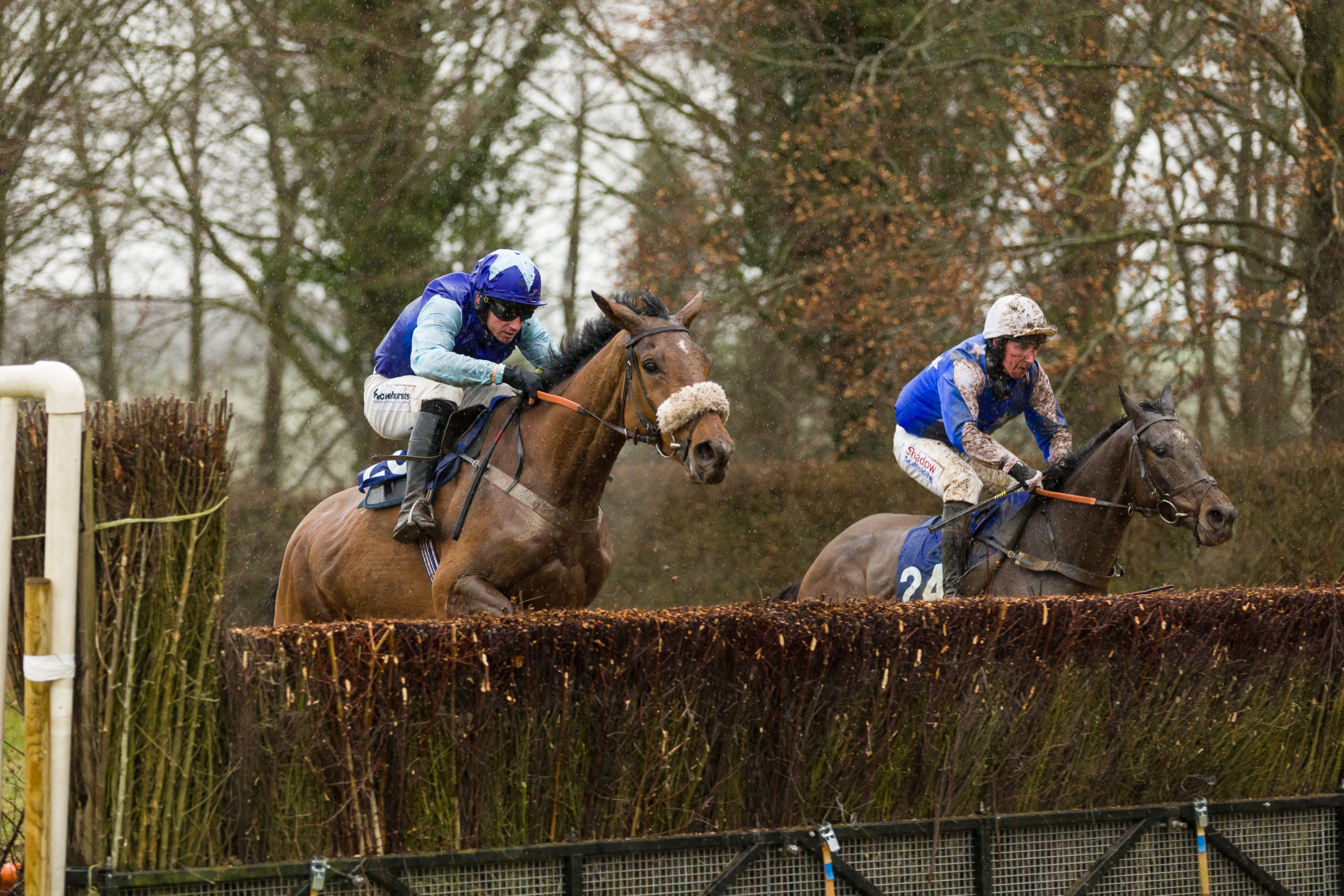 David Kemp based at Kilverstone near Thetford, trains a reduced number of horses these days but each of his participants can be categorised as quality. Kemp saddled two winners from his only runners on the day and How To Get Away recorded back-to-back Horseheath victories with a comfortable success in the opening Conditions race. The trainer felt more under pressure prior to this race compared with his expectations before How To Get Away’s appearance at the January fixture. Never seemingly off the pace, the improving 8yo was always travelling and jumping satisfactorily to take the spoils by 3 lengths from Clondaw Westie. Winning jockey Dale Peters was also aboard Rebel Dawn Rising, a distance winner of the Intermediate race, for the Norfolk trainer, who jointly owns this front-running stayer with his wife, Imogen. Another pleasing performance from Rebel Dawn Rising on his seasonal debut in conditions that were deteriorating, by the time he was saddled, to record his fourth win from seven pointing starts. 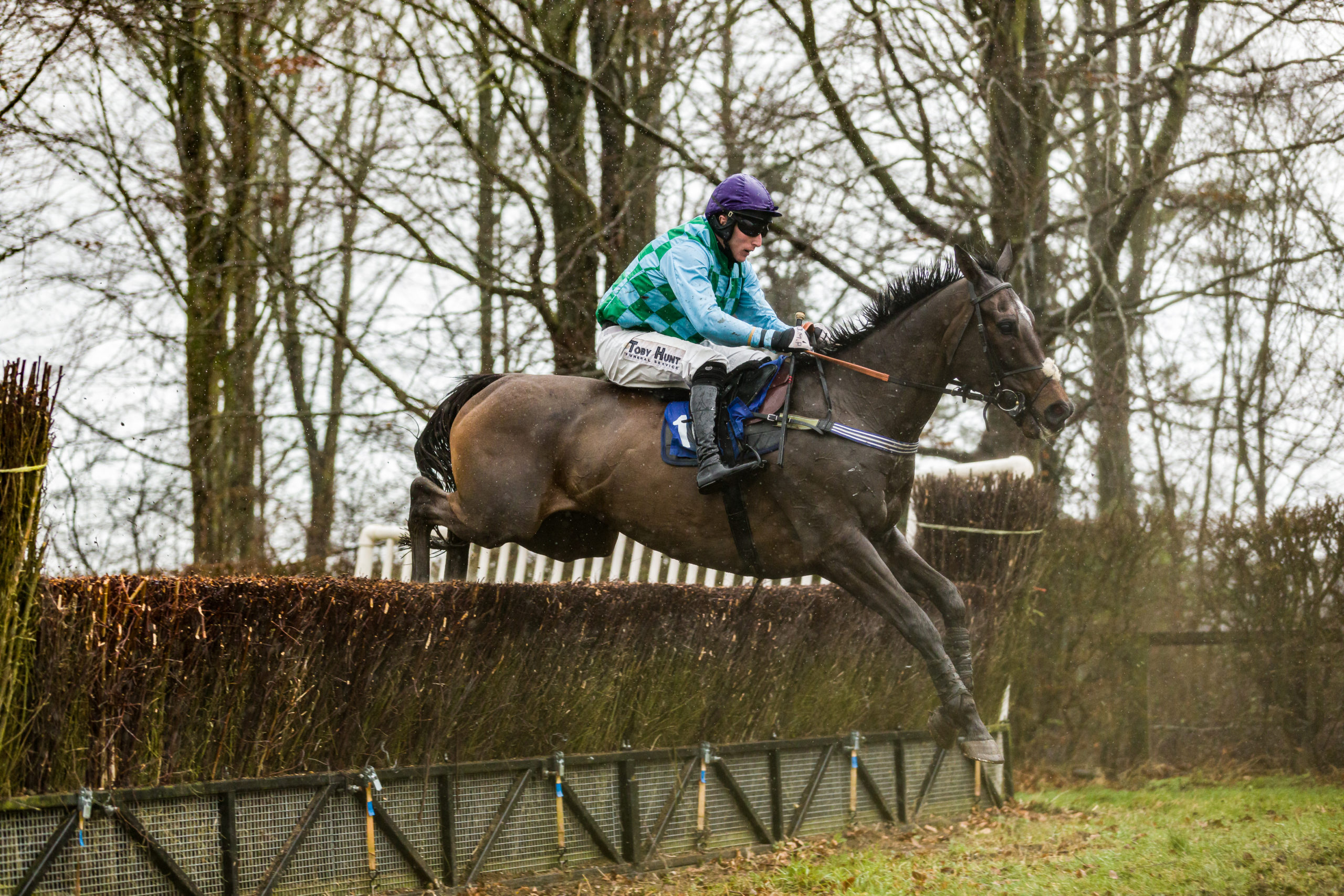 Rebel Dawn Rising and Dale Peters in clear isolation in the Intermediate race.

The most impressive ride of the day came from Izzie Marshall on Hawkhurst, in the Ladies Open race. Appearing in total command throughout the contest, Izzie was happy to stalk her main rivals before moving Hawkhurst, who was on a good behaviour day for him, into top gear and glide past the favourite, Myth Buster with Lily Bradstock aboard, to win by 3 ½ lengths. This was this remarkable 12yo’s seventeenth pointing success since his first victory at Boulta, in Ireland, in December 2014. Izzie has partnered him to five of those victories and on this smooth and confident display has acquired the winning formula on a talented horse who can be equally frustrating to connections, on one his quirky “off ”days. 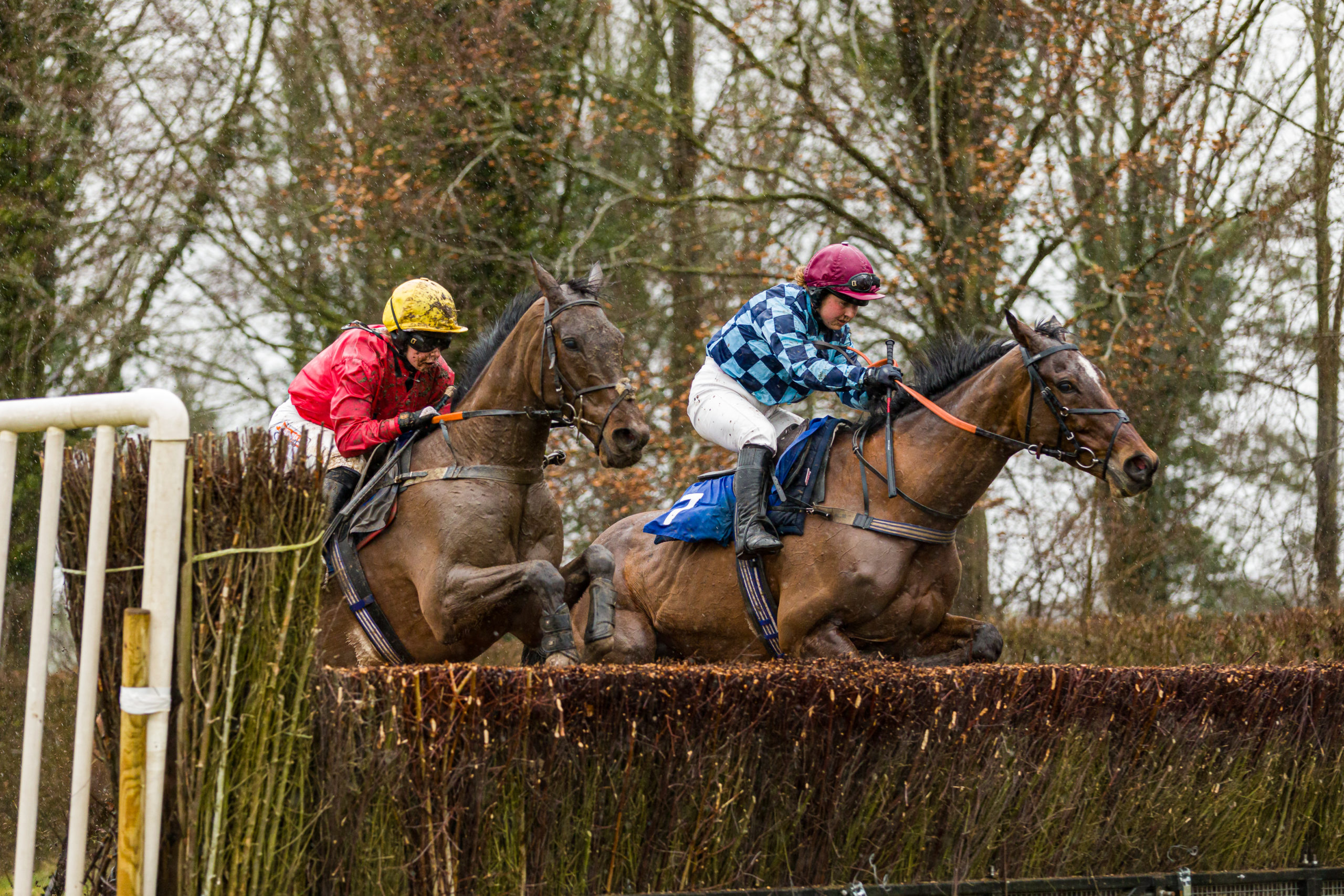 Hawkhurst and Izzie Marshall ( nearside) about to take the lead from Myth Buster and Lily Bradstock, in the Ladies Open.

Dragon d’Estruval and Ben Bromley made short work of their rivals in the Mens Open race winning by a distance from one other finisher. The 9yo definitely prefers a sounder surface to the one he encountered at Horseheath and has benefited from the switch to pointing after some disappointing recent performances under NH rules. According to Ben the change has “sweetened him up” and he has now recorded two victories and a narrow defeat from three outings. Meanwhile Ben is thoroughly enjoying his time at the Rowley’s stable combining weekday mounts under rules with pointing commitments at the weekend, fully justifying his decision to remain in the amateur ranks, for the current season, at least. 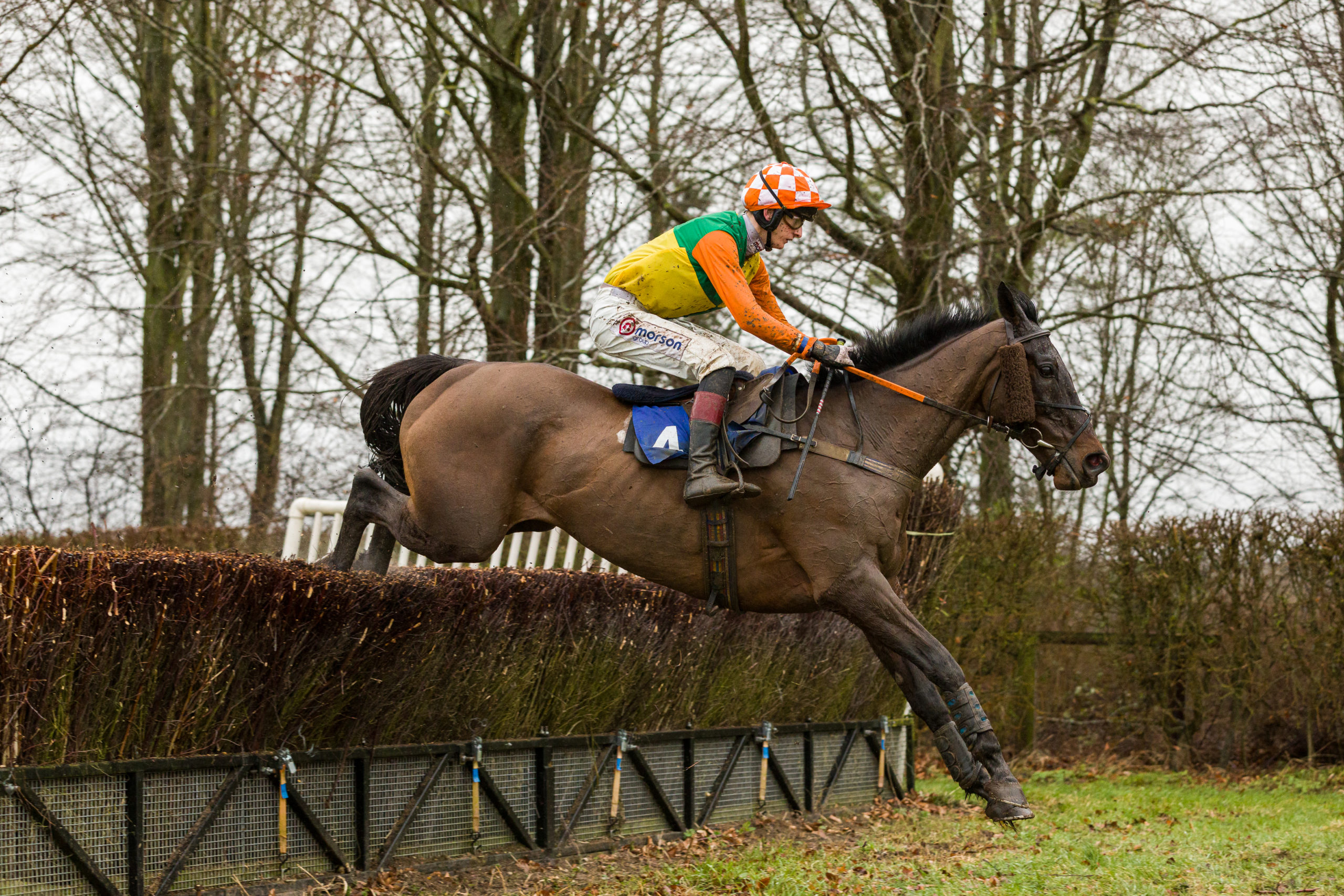 Dragon d’Estruval and Ben Bromley on their way to victory in the Mens Open race.

The concluding Novice Riders’ race, run ironically with blue skies beginning to appear, went to previous course winner Mr. Love and Murray Dodd to supplement their success, here, at the December meeting. Born in Scotland, twenty-one year old Dodd was securing his third career win and the pairing confidently went clear over the final three fences to pull 15 lengths ahead of their nearest rival, First Drift, at the finish. Joint owner and trainer Nick Pearce was clearly delighted by the performance of Mr. Love with every possibility of further winning opportunities being secured, as the season progresses. 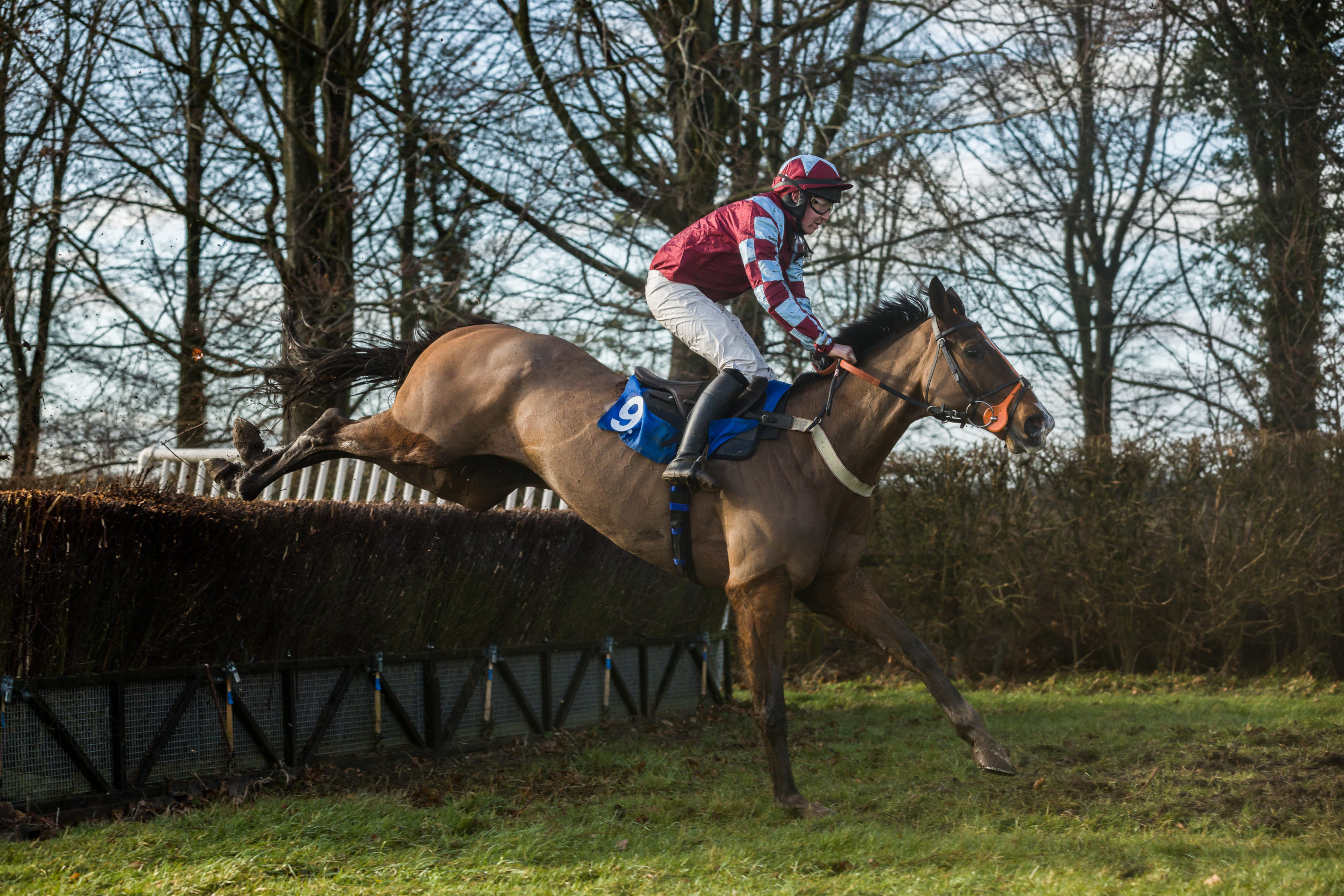 Mr Love and Murray Dodd secure their second Horseheath win of the season in the PPORA Novice Riders’ race.

As the expression goes ‘you can’t win them all’ and the weather gods came out on top, at this meeting.