What a memorable, opening day of the new East Anglian season. Not for the rain-swept, atrocious conditions that engulfed Horseheath racecourse but for the superb achievement of trainer, Tom Ellis, who recorded six wins from the seven races, on the card.

Based in Marton, near Rugby, the Ellis horsebox is a frequent visitor to East Anglia and Tom’s success rate is phenomenal, not just in this area but nationally, as well. The day commenced with a perfect start for the reigning champion trainer with his wife Gina Andrews, the winning jockey, on the first two successes of the afternoon namely Koyote ( Conditions race) and Fairly Famous ( Open Maiden). Both horses are jointly-owned, by the Signy and Marriage Families who have bought three new acquisitions, for the season, two of which obliged here. Their success was a welcome tonic for the most important man behind High Easter fixtures, Simon Marriage, who confirmed that the last double he had secured, at Horseheath, was back in 1993 with two old favourites from the past, Takeover Bid and Whistling Eddy, both ridden by Tim Moore. Co-incidentally, Whistling Eddy won the same trophy back in 1991 when landing the Adjacent Hunt’s Maiden, under Tim.

Adam Signy who resides at Pettistree in Suffolk was equally delighted when accepting the trophies at the post-race prize-giving. Adam’s son, Oliver, who trains professionally in Lambourn is currently enjoying a high percentage strike-rate making Adam, understandably, a very proud father.

Gina Andrews, seeking her tenth National title, was gaining her first winners of the season, was also victorious on Latenightfumble, in the Ladies Open to complete her treble. Gina is fast approaching 350 victories on the point-to-point circuit. Latenightfumble is owned and bred by Pippa Ellis, Tom’s mother, so another real family affair with plenty of prospects for further success during the season. Gina’s brother, Jack, confidently landed a double, for his brother-in-law, on Fumet d’Oudairies in the Mens Open and All Is True in the closing Conditions Maiden. The former is now unbeaten around the Horseheath course having entered the winners’ enclosure on five occasions whilst All Is True’s performance bodes well for owners, The Oak Partnership, who can expect some exciting days ahead, with this youngster. 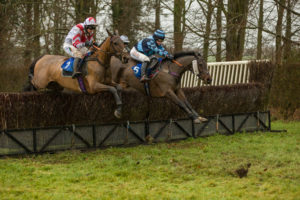 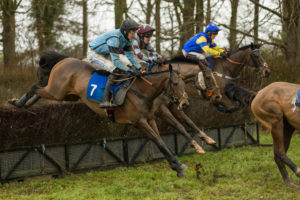 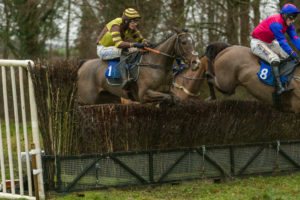 All Is True and Jack Andrews ( nearside)

The other winner of the sextet came in the Novice Riders’ contest which saw Ellie Holder enjoying her first success on Bawnmore, on her thirteenth ride. Obviously not unlucky, for this young lady who carried out her riding orders to perfection by timing her winning move, to lead in the last few yards of the race.

Ellie and Bawnmore may have only recorded a neck success but she was totally confident of getting the judge’s verdict. Another satisfactory team effort as Ellie works for Tom and Gina during the week.

The only race that went the way of another trainer was Francesca Poste’s Hung Jury, forcefully partnered by Amber Jackson-Fennell, the stable’s novice jockey, with the pairing inflicting a 3 length defeat on Goleirihem by comfortably holding the odds-on favourite, on the run-in, to win the Restricted race. 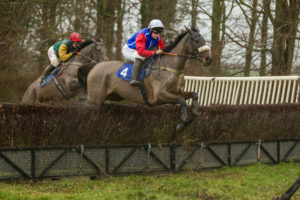 The incessant, driving and swirling rain made viewing extremely difficult for everyone and full sympathy to the commentator who gallantly battled on, from his elevated commentary position, which was in receipt of the full force of the inclement conditions.

Of the 73 entries, there were 60 individual horses and a extremely pleasing,47 runners on the day. The post-race “hacks” initially thought that the Ellis six-timer was being achieved for the first time but subsequent forum comments confirm that Philip Rowley also landed an equivalent haul, at Bangor-On-Dee, in 2013.

At Horseheath, we witnessed seven intriguing races, almost completely dominated by the Ellis’ bandwagon who deserve every element of their success through the fitness of their horses coupled with the dedicated hardwork, enthusiasm and placing of their equine stars, to ultimately triumph on the racecourse.