With the weather set fair and many additional attractions arranged there was another extraordinary attendance at the Essex and Suffolk meeting at Higham on Good Friday. Even the overflow car parks were up to capacity and everybody seemed to be having an enjoyable time, having missed out on the popular fixture, for the last two years.

The on course action commenced with a high-grade spectacle of a side saddle dash with eleven commendable participants treating the crowd with a fast pace performance of this form of equestrianism. Two exciting pony races followed which was a great thrill for the children involved, to be cheered home by the large audience.

There was also welcome support from the region’s owners and trainers to declare their horses providing six interesting races to entertain the racegoers. Several of the trainers provided complimentary comments regarding the state of the ground which had been regularly watered throughout the week, producing safe jumping ground.

The opening Hunt Members’ race went to the outsider of the four runners when Chapelier, ridden by Alex Chadwick, came through to make significant ground between the final two fences  after all four runners were still tightly packed at the final open ditch. The favourite The Brassmoulder , was pushed 3 lengths clear, at the cross fence, by Izzie Marshall but Chadwick had the move covered and brought Chapelier home 3 ½ lengths to the good. for a well-deserved success for his ebullient owner/trainer John Whyte. John has always been a great supporter and admirer of Alex and this combination has proved successful, in the past. Alex admits he watches John’s horses closely when they are running in races he is not qualified to ride in and pinpoints certain areas where he sees perhaps improvement could be obtained with a different approach from the saddle. 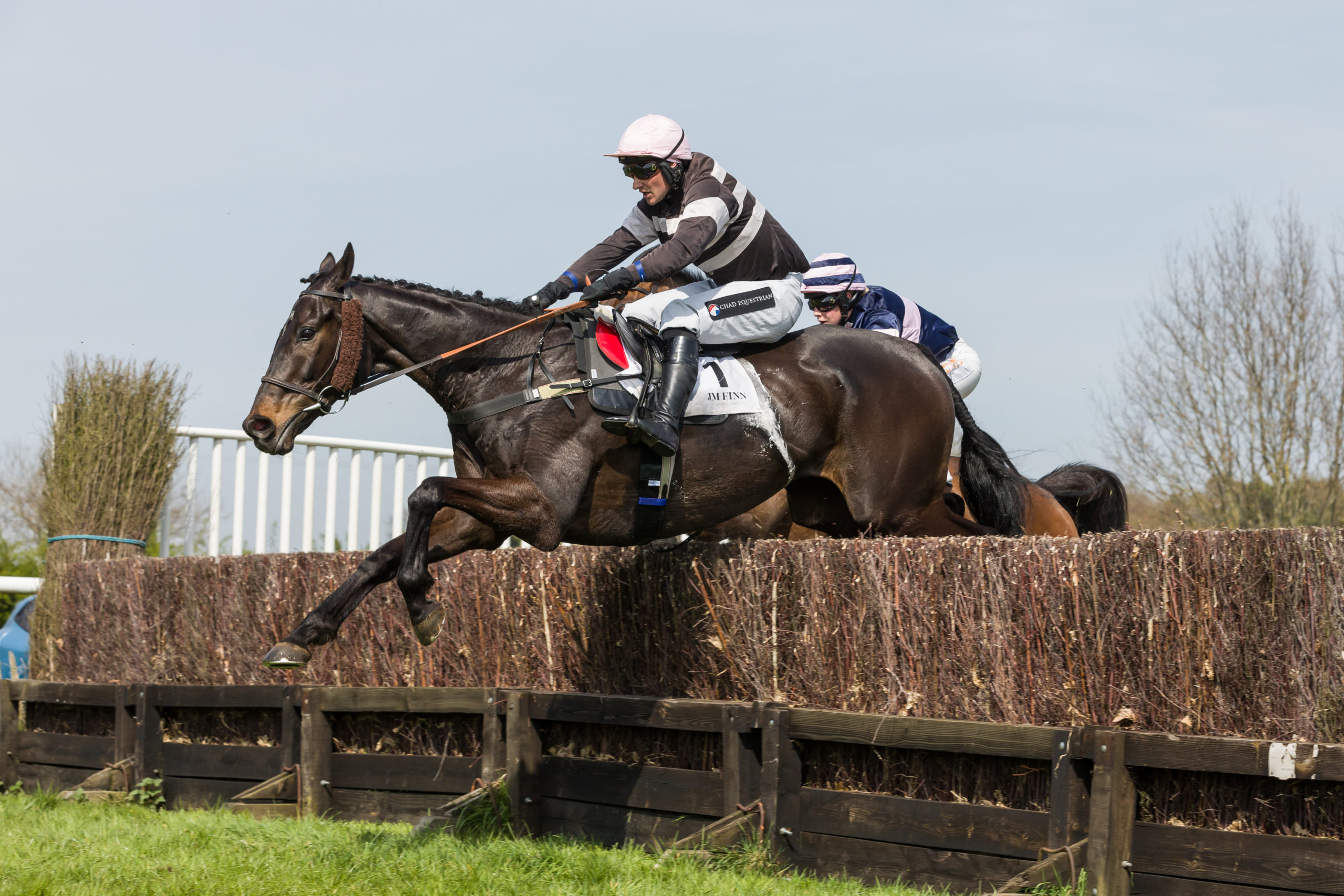 Chapelier and Alex Chadwick winners of the Hunt Members’ race

There was a first winner for jockey Connor Baker who also owns and trains Always On The Run and was therefore perfectly qualified to declare for the Owner/ Trainer Conditions race when the pairing just snatched the verdict, by a head, from Forever Field.  Connor who divides his time between being a software student and riding out at James Owen’s Newmarket yard made up ground on Always On The Run, made favourite at the off, on the run-in to provide the closest finish of the day. Archie Wright and Forever Field took up the running going out on the final circuit and the favourite was still 4 lengths adrift of them at the second last with the final result in doubt until the shadow of the winning post. 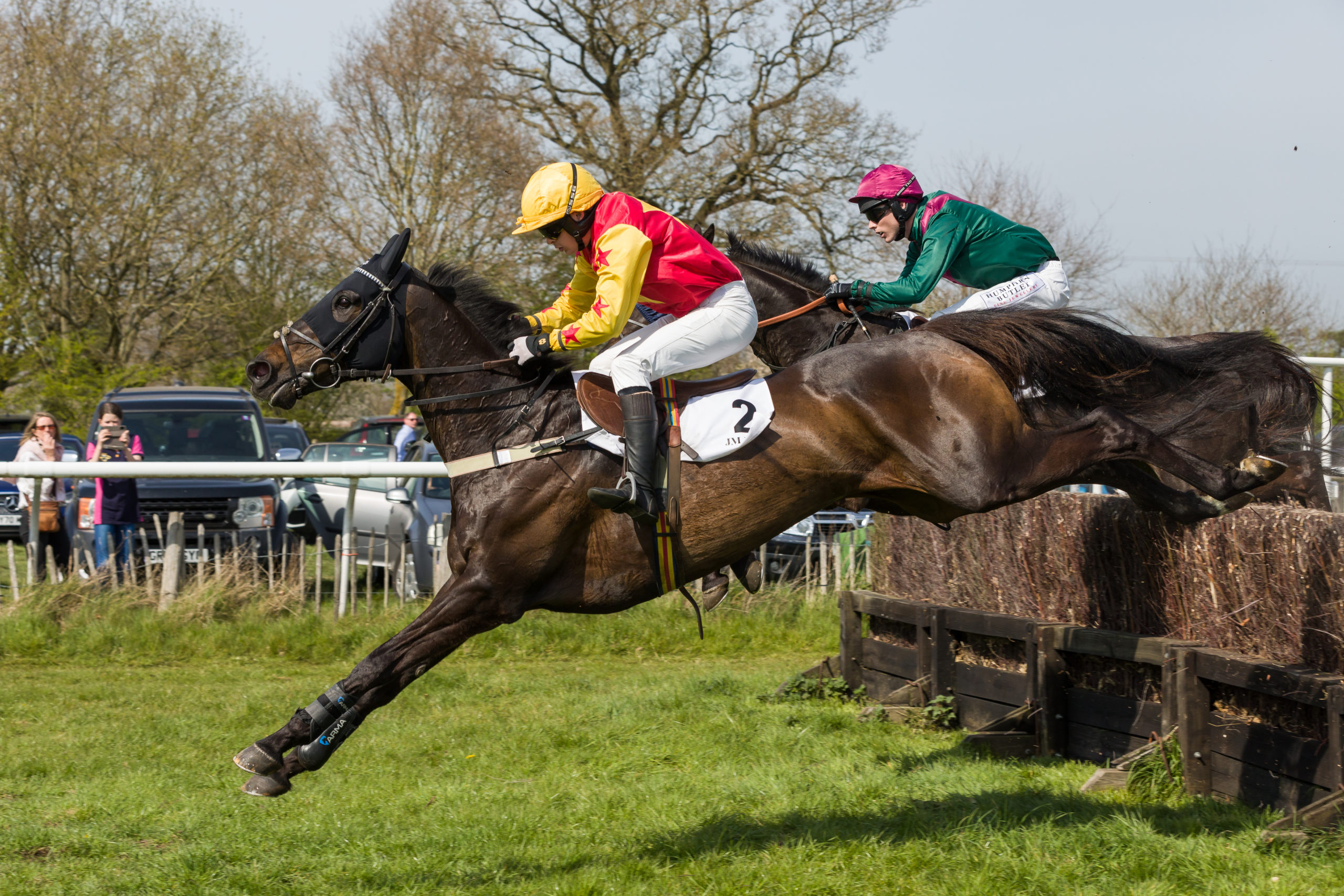 Previous course winners, Just Cause and Rupert Stearn, had plenty in hand to see off their only rival, Princeton Royale in the Mixed Open event. As per the commentator’s in-running comments “ Just Cause is going the better and travelling comfortably with Princeton Royale being pushed along.” The final winning distance was adjudged to be 3 lengths but easily could have been more than this if Rupert had pushed all the buttons on Just Cause, who has now won 7 times for the Stearn family. 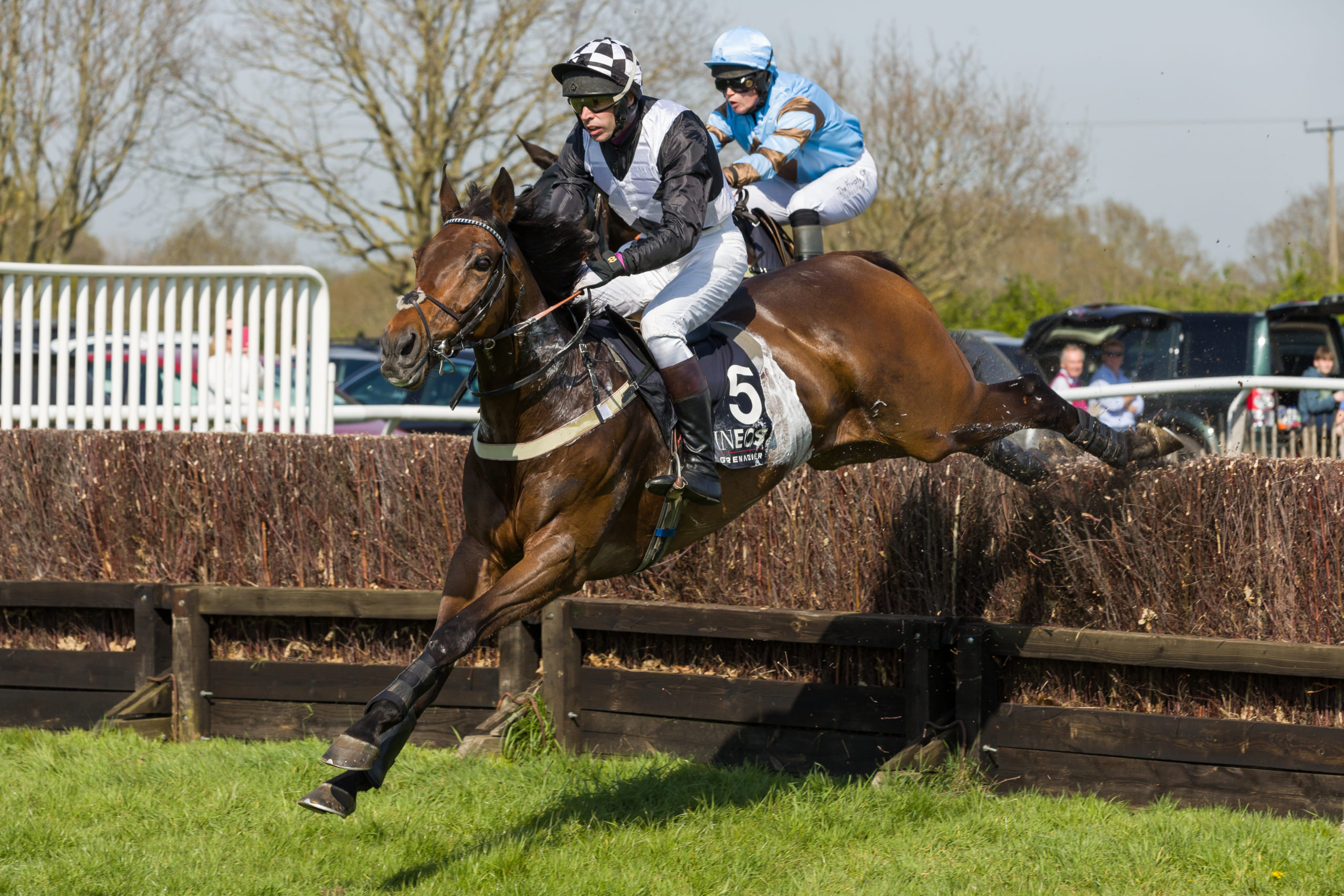 Just Cause and Rupert Stearn land their third course win in the Mixed Open race.

The Ed Turner trained grey was never really troubled after the early exit of the favourite although ideally Charlotte would have preferred some closer company, on the way round. The nearest Lord Park Star, their only remaining rival, got near to them was a spirited attempt to close the gap on the run-in where Paddy Barlow managed to get his mount to make in-roads into their deficit but failed by 2 lengths, to peg back Aigle De La See. Miss Butler is currently studying for a degree in Bloodstock but still manages to ride out two mornings at Ed Turner’s yard with a similar apportionment of time with James Owen’s string of horses. 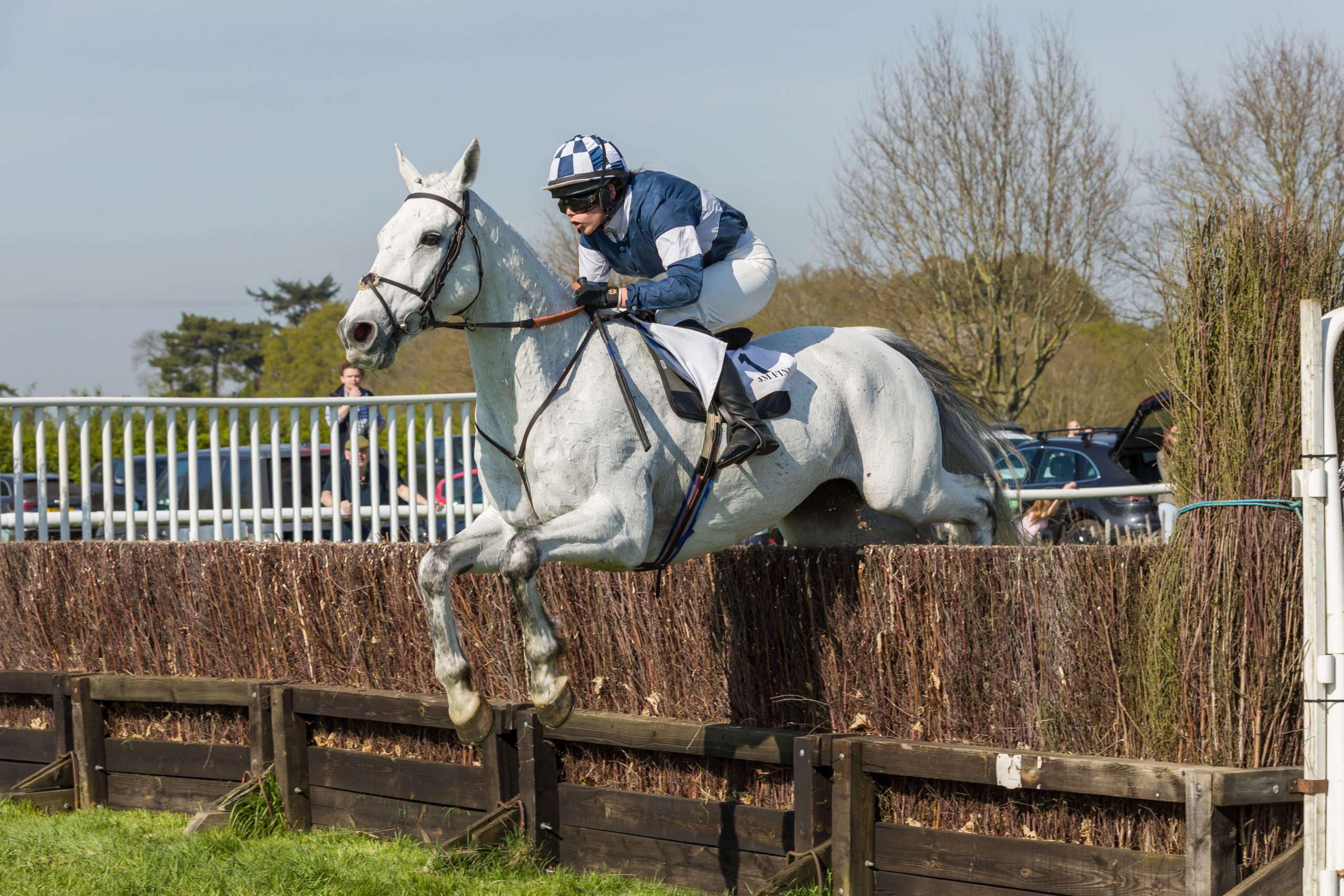 Oval Street and Archie Wright followed up their recent Fakenham win with another comfortable victory by 7 lengths from Ego Des Mottes. A previous course winner here in January, Oval Street runs in the ownership of  trainer Nick Wright and his sister Lucinda whilst Archie, son and nephew to the owners, wears the colours of his grandmother, which have remained registered for understandable, sentimental reasons. Here Oval Street who is undoubtedly on the upgrade was never in danger and as Archie explained afterwards “running on a left-handed course suits him perfectly”.  Look out for more success to come from this more than capable 6yo. 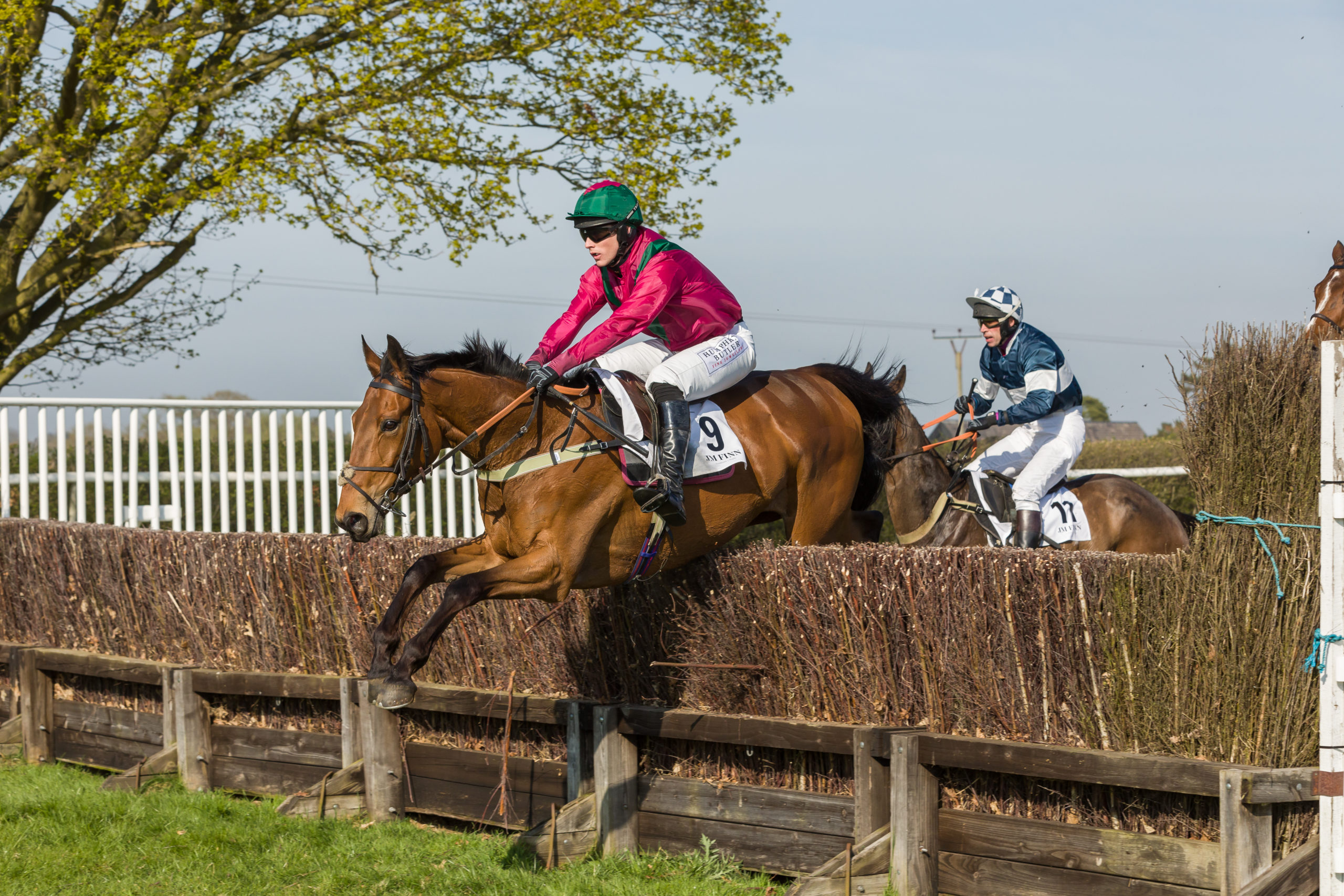 Oval Street and Archie Wright in command in the Conditions race

Some Boy McCoy finally made the winners’ enclosure in the concluding Maiden race. Izzie Marshall having held her mount up on the first time round made her move going out on the final circuit and there were three still very much in contention at the cross fence, four from home, namely Some Boy McCoy, Walk In Milan and High Street. Izzie and the winner forged clear of their nearest rivals over the last to come home 5 lengths in front of High Street, ridden by her brother Charlie, at the finishing line. 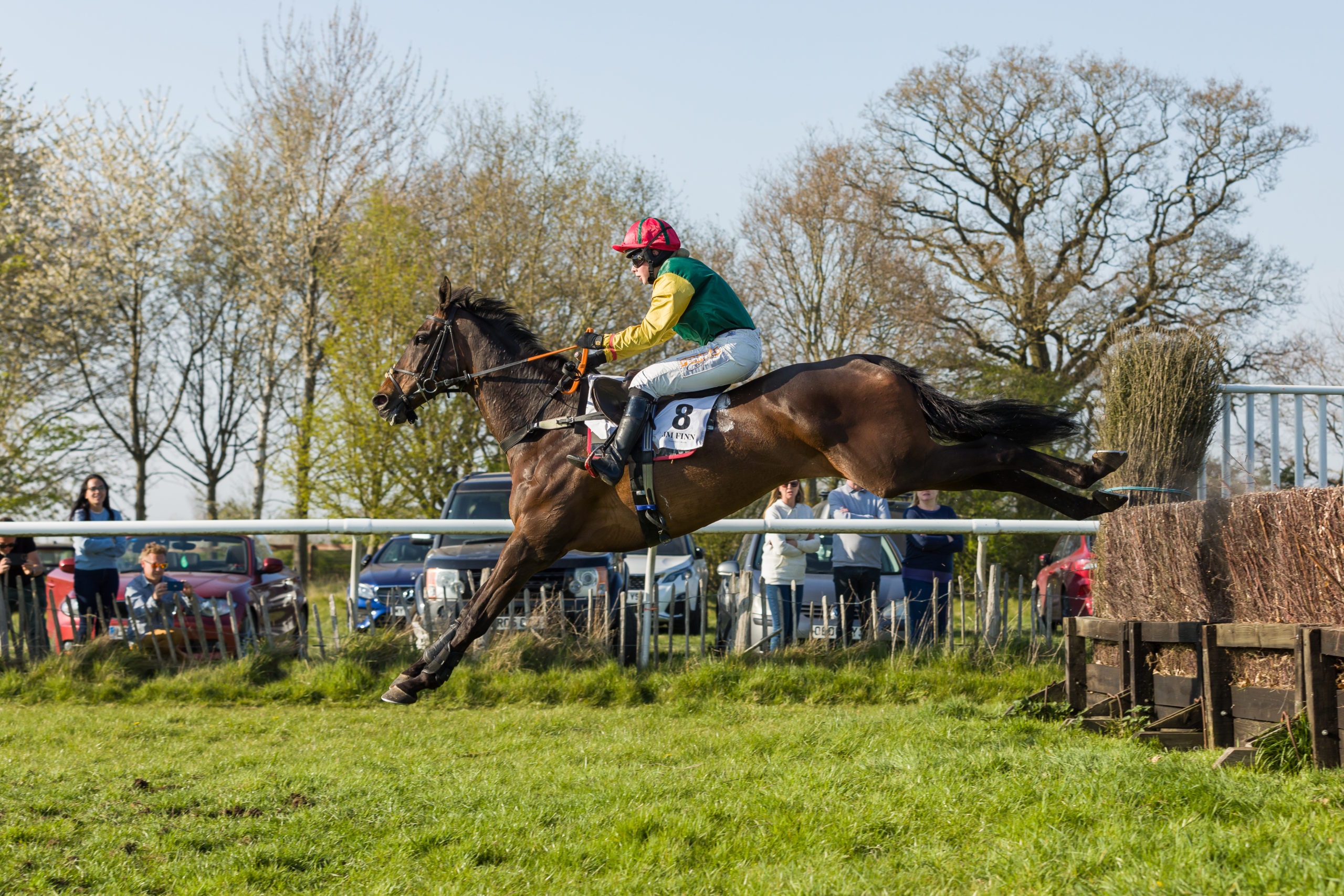 Some Boy McCoy and Izzie Marshall convincing winners of the Open Maiden race.

Since the meeting at Higham, it has been announced that the scheduled, final meeting of the East Anglian season, due to take place at Northaw, has regretfully been abandoned, following an inspection by the Clerks of  the Course, deciding it would be unsafe to proceed with the fixture, due to the course conditions.