This was a proper point-to-point meeting with plenty of runners, an above average attendance and most pleasing of all, acceptable weather conditions.

The East Anglian area flag was flying proudly after this Dunston Harrier’s meeting at Ampton, having produced four winners, from the seven races, for training stables based in the region.

There was a double triumph for the James and Jenny Owen’s yard, based in Newmarket, with firstly Twilight Girl, following up her recent narrow defeat at Horseheath, giving 19yo Jamie Gambin, from Haverhill, his first-ever winner in the opening Veteran Horse Conditions race. The pairing were always vying for the lead and Gambin made full use of the mare’s fitness, gained from her previous outing, and they stayed on strongly to be 2 lengths clear, at the finish.  Jamie didn’t have association with horses until about three years ago and his liking for anything with “speed” prompted him to take more interest and it has culminated in him now working full-time at the Hamilton Road, Newmarket stables, operated by the Owens. Jamie had been looking after and work riding Twilight Girl, for the last two weeks, since the Horseheath race on New Year’s Eve where fellow colleague Tom Frogley had the ride. The agreed plan is for Tom to take back the duties with a view to renewing his association with mare on her next outing, possibly back at the Cambridgeshire course at the end of the month 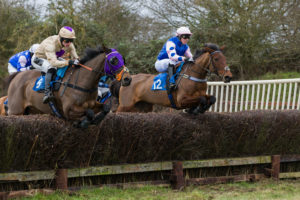 The Owens, who were not in attendance but away on a ski-ing break, were also responsible for the Midnight Cowboy’s victory, in the Mens Open. With Rupert Stearn taking the winning ride, the popular grey horse provided a deserved success for owner Simon Stearn who always prepares the Ampton course in such fine condition, whatever the weather, leading up to a meeting. The grey was considered to possibly be in need of the race but this 12yo showed a clean pair of racing shoes to his four younger rivals in what was considered to be a very competitive contest, which included, the favourite, Tullys Touch who had an unbeaten record of five wins at Ampton, at the start of the race. 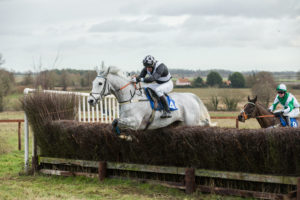 Andrew Pennock trains his horses adjacent to the Ampton course, at Timworth, and increased his already enviable, winning record at the venue when Taita Hills partnered by Charlie Marshall comfortably held their rivals in Division One of the Open Maiden race, by five lengths. This was a much improved performance from the youngster and Pennock was delighted as the 5yo had been “a different horse since his summer break and had schooled immaculately a few days earlier” He also added that improved performances were now expected from all his runners, as a change of feed had contributed a huge difference to his horses’ overall, well-being. This theory was backed up when The Pier Field ran very “green” but was a close runner-up in Division Two, beaten only 1½ lengths and then Pennock’s Sum It Up was also narrowly beaten in the final race of the day. 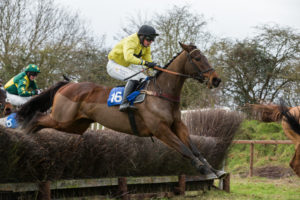 The second division went to the John Ibbott trained Mossy Be Lucky, providing title seeking, Jack Andrews with another winner as the pairing powered their way up the Ampton hill to win by 1½ lengths. Ibbott operates near Halesworth and discovered Mossy be Lucky was suffering from several internal ulcers, during last season. With the required treatment administered, the faith the trainer has always had in his horse was restored, with this winning result. 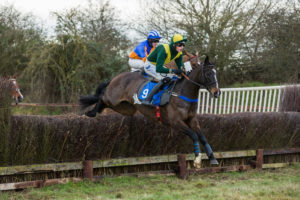 Mossy Be Lucky and Jack Andrews

Other winners came from outside the area with Precious Bounty and Ellie Callwood impressively stepping up to Open class in the ladies contest. Their front-running display suggests they could run up another sequence of successes to add to the five victories they enjoyed together last season. This was Ellie’s first ride of the season and her mother Joanne had travelled down from Cheshire to witness her daughter, aboard Precious Bounty, enter the Ampton winners’ enclosure, as they did in similar fashion last March. 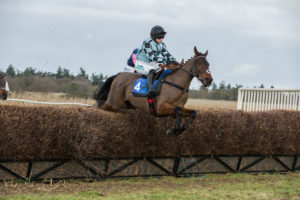 Supreme Johnson and Tom Broughton took the Restricted race after making their winning move three fences out, having seen Highland Glory take up a commanding lead, in the early stages of the race. Supreme Johnson was being saddled by trainer Myles Osborne for the fifth occasion already this season and this was the 6yo’s second success during this busy period. 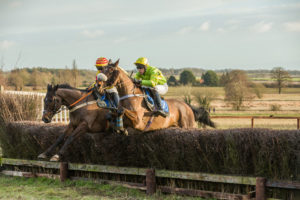 The concluding event went to another young jockey, landing his first career win, Seb Mead who steered Buachaill Dana to victory, in the closest finish of the day in the Novice Riders’ race. Mead, who is head lad for David Phelan, the winner’s trainer based near Ashford in Kent, was delighted to have broken his duck after approximately fifteen previous rides and looks forward to adding to this initial success with some more rides planned for Horseheath, at the end of the month. 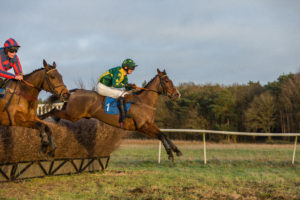 A great day’s pointing, nobly supported by the paying public, sponsors and owners, who declared 45 runners on the day, which left everyone wanting more of the same, for the rest of the season.

All photographs courtesy of Graham Bishop