The truncated East Anglian point-to-point season ended at High Easter, near Chelmsford, with some notable successes and run on outstanding ground conditions, considering the recent extreme, dry weather. Over 200,000 gallons of water had been applied, by Clerk of the Course Simon Marriage, to produce an exceptional racing surface which generated plenty of runners, exciting finishes and some noteworthy performances.

Riding doubles were achieved by Izzie Marshall and Jack Andrews; training doubles by Alan Hill and Tom Ellis and the meeting concluded with a first-ever winning ride for Chris Hopkins on Gun Shy, in the Members race. Chris, originally from Bury St. Edmunds but now, normally working and living in London, has made rapid progress with his equestrian skills. After initial involvement with the pony club scene as a youngster, Chris re-kindled his association with horses, after fifteen years, mainly due to lockdown, working back at home in Suffolk. He thanked West Suffolk trainers Sarah and Tony Humphrey for all their assistance with him and the horse and making the opportunity possible. . Gun Shy made most of the running during the race and was two lengths to the good at the second-last obstacle and gamely held his place, to the winning line, with admirable assistance from Chris, from the saddle. In a post-race comment Chris even apologised to Nigel Padfield, owner/trainer of the runner-up Direct Flight, for denying Nigel his tenth consecutive victory in this particular Members’ race. 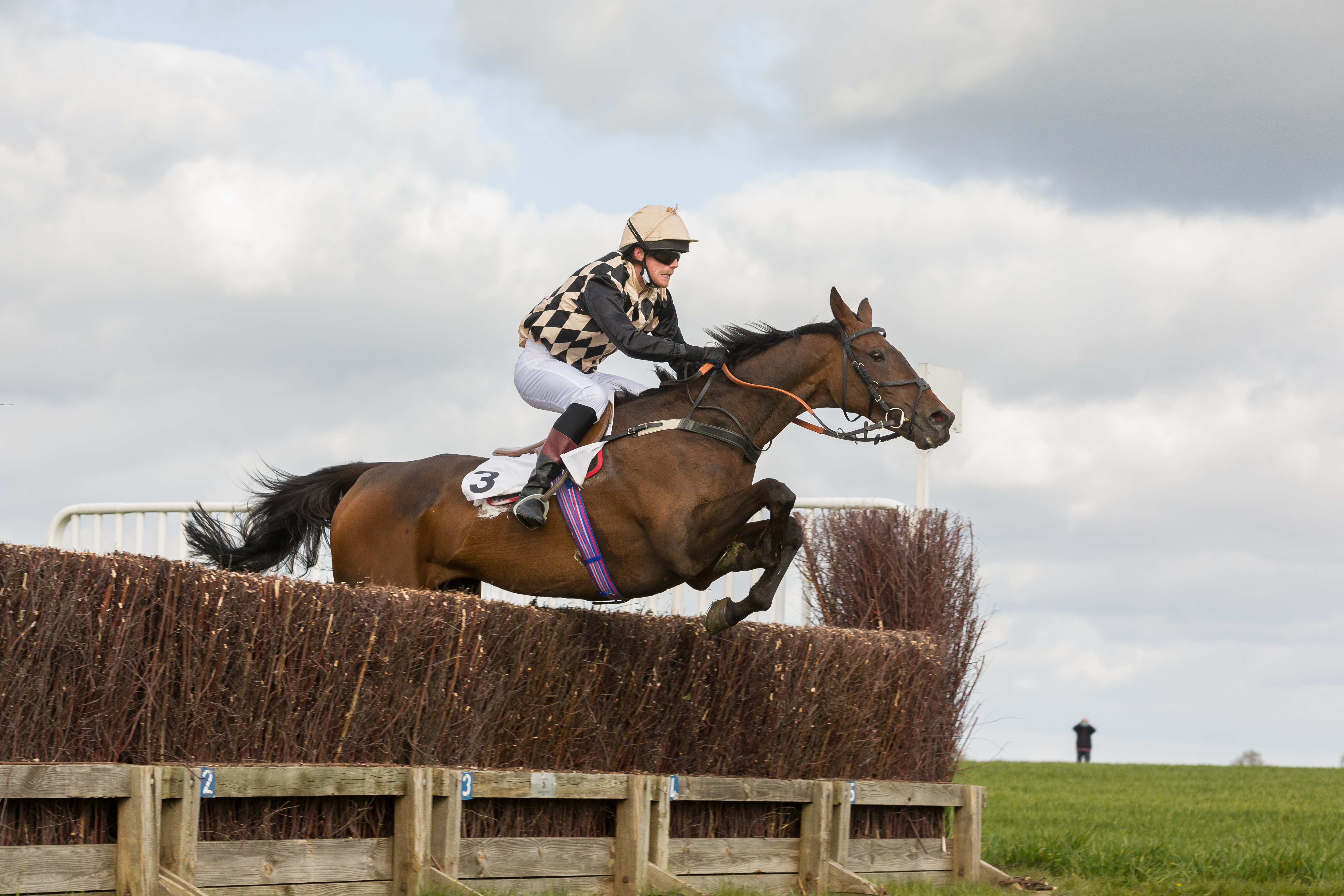 Izzie Marshall’s first success, of the afternoon, came with Laurium in the Ladies Open, when racing for the Warwick Vase which Izzie also won in 2019, the last time it was contested. The pairing conducted a steady pace throughout the first circuit and always was capable of finding more when challenged by Mercers Court with a 3 length winning margin at the finish. 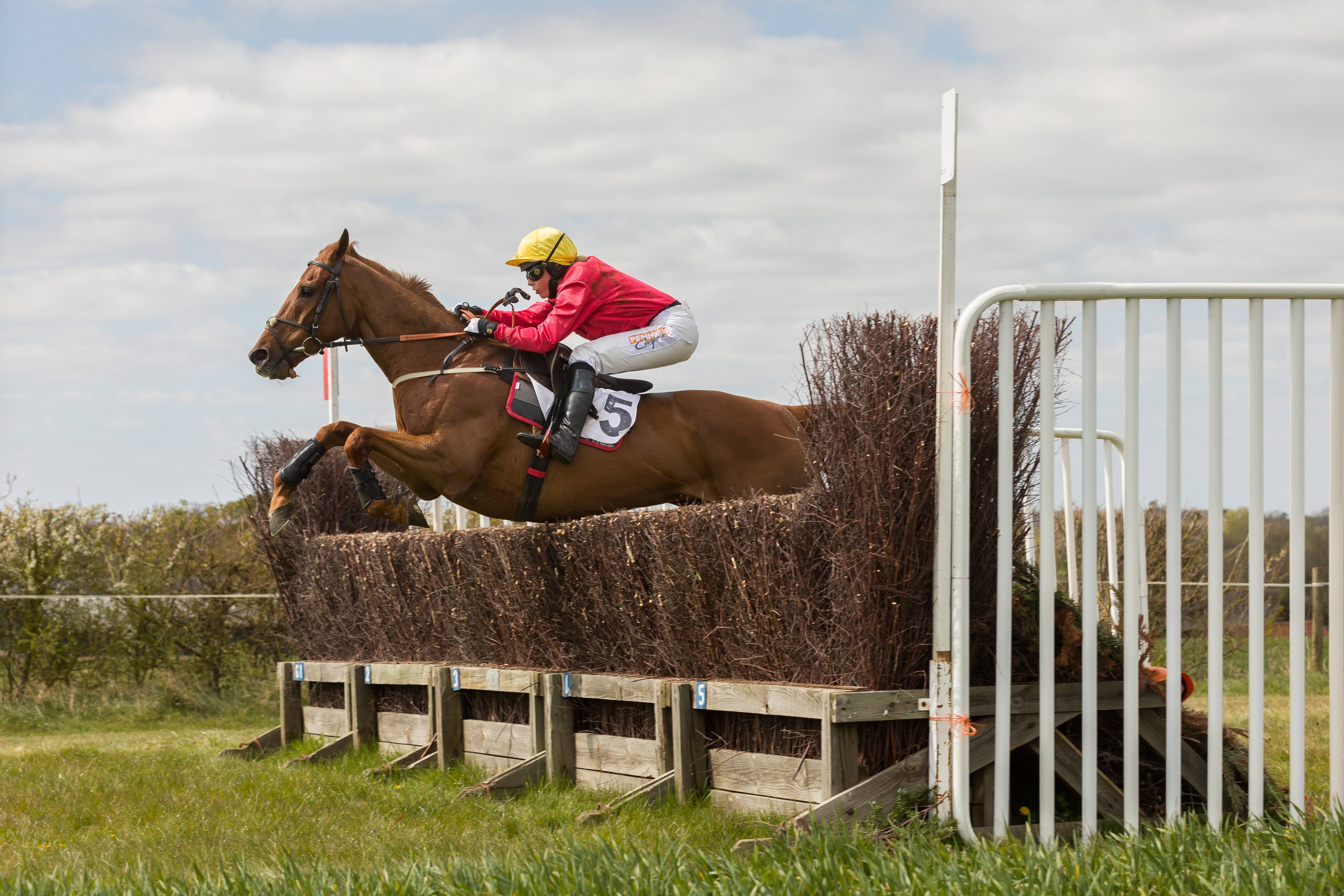 LAURUIM and IZZIE MARSHALL clear victors of the Warwick Vase

Normofthenorth won the Intermediate race, unchallenged, to give Izzie her second winner, of the day. The winner took control of the race entering the meadow for the last time with the favourite, Killinkere, in pursuit but any chance went when he took the third last fence, by the roots. Miss Marshall’s attacking ride resulted in a 10 length success, in the fastest time of the day. 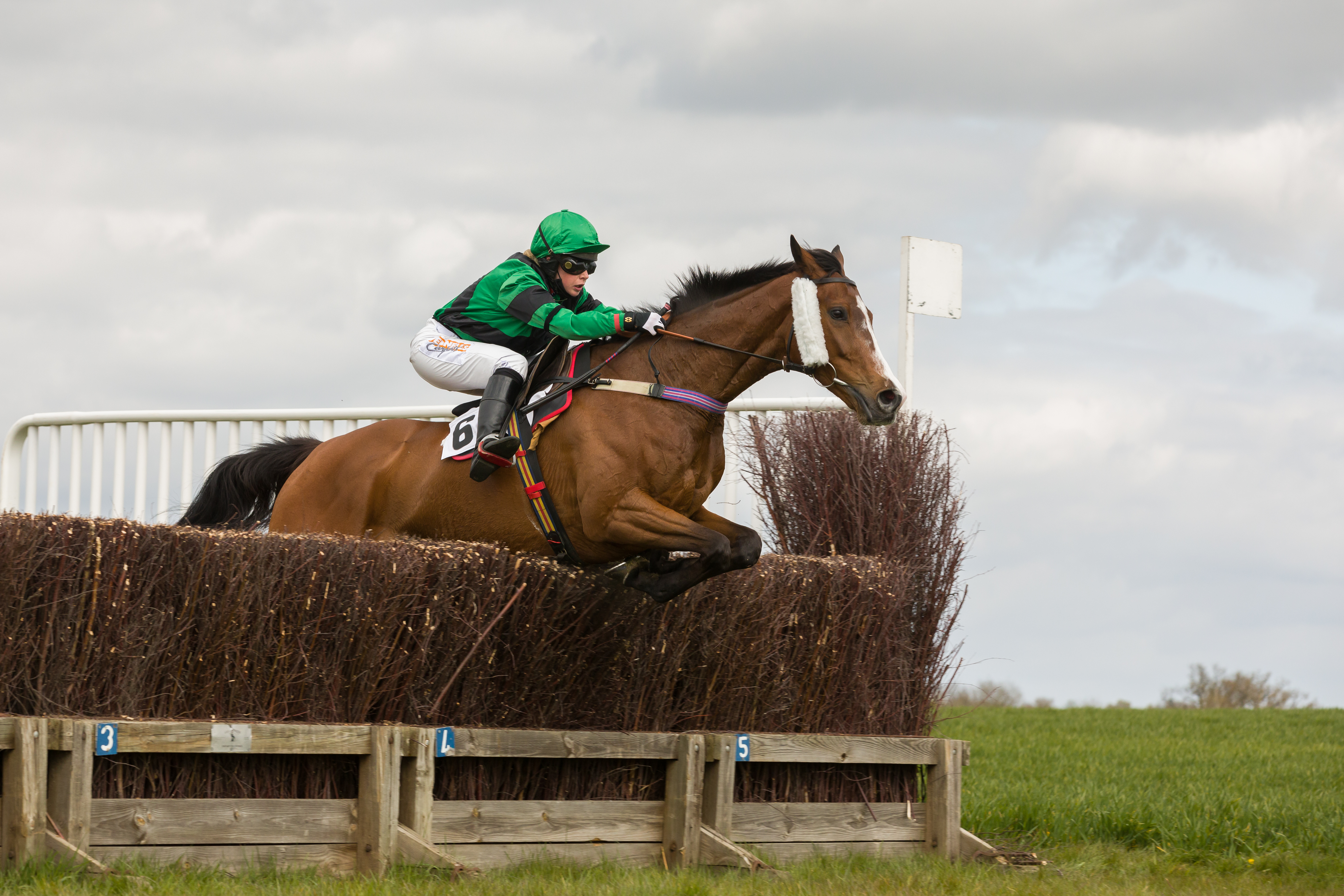 Reigning national champion Jack Andrews’ double came courtesy of Chongalolo in the Maiden event which followed Jack’s thrilling Mens Open victory on Tullys Touch. Midnight Cowboy, who had tanked along for the whole of this race still held the favoured inside line, coming round the last bend and touched down over the last fence in front. The grey was then swallowed up by no less than three other rivals with a proverbial horse blanket covering the first four horses home in this race. Forever Field finished 2nd in this thriller beaten just a neck, for owner/trainer Nick Wright with Nick’s son Archie having the ride and their late effort was nearly rewarded with the main prize. Tullys Touch, the eventual winner, by a neck, is a very consistent animal, trained by Melanie and John Ibbott. Melanie confirmed the 8yo is a delight to train and his performance today was not unexpected whilst Jack Andrews was also full of praise for his winning partner, who he is pleased to refer to as “one of his favourites”.

Chongalolo was entitled to improve on his Maisemore Park run at the end of March and did just that in an effective style of a progressive individual. He and Jack jumped to the lead at the final open ditch with Mountain Assault and Dale Peters their main challenger. Chongalolo stretched his lead to a couple of lengths, going to the last, which proved vital as there was only ¾ of a length between the pair at the finishing line. The 6yo is a fine prospect for Adam and Clare Signy, to own for the future. 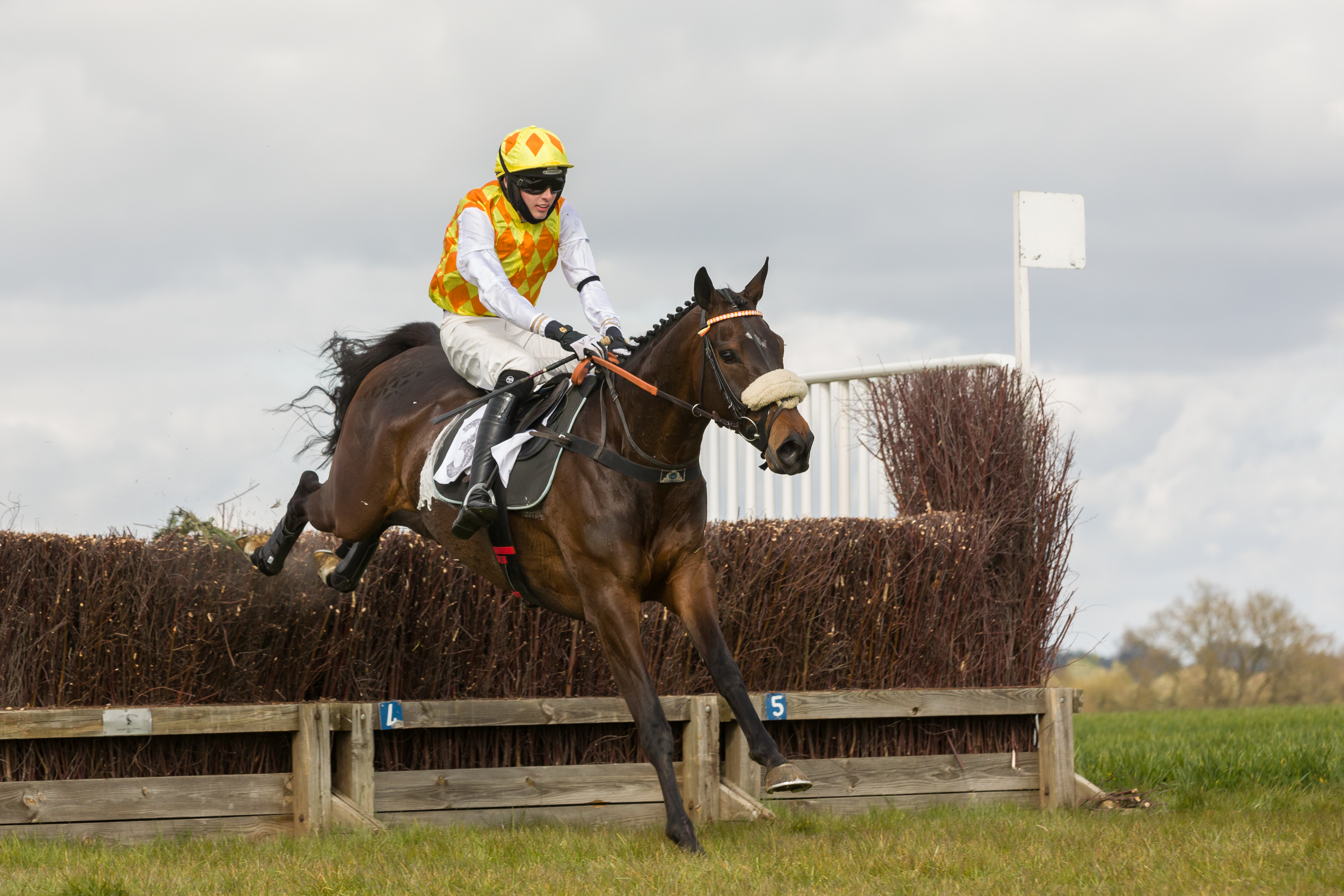 CHONGALOLO and JACK ANDREWS  winners of the Maiden race.

The Signys also have a half share with the Marriage family, in Fox Valley, who had earlier, effortlessly, in the hands of Gina Andrews, registered a success in  the extended 3 ¾ mile PPORA Members Conditions race. The 8yo mare appeared to enjoy the ground conditions and had no problem with the distance of the race and thrilled trainer Tom Ellis, with her performance. Fox Valley is becoming extremely versatile having won over the fast, shorter course at Higham earlier in the month and her future outings could include entries in Ladies Open contests. 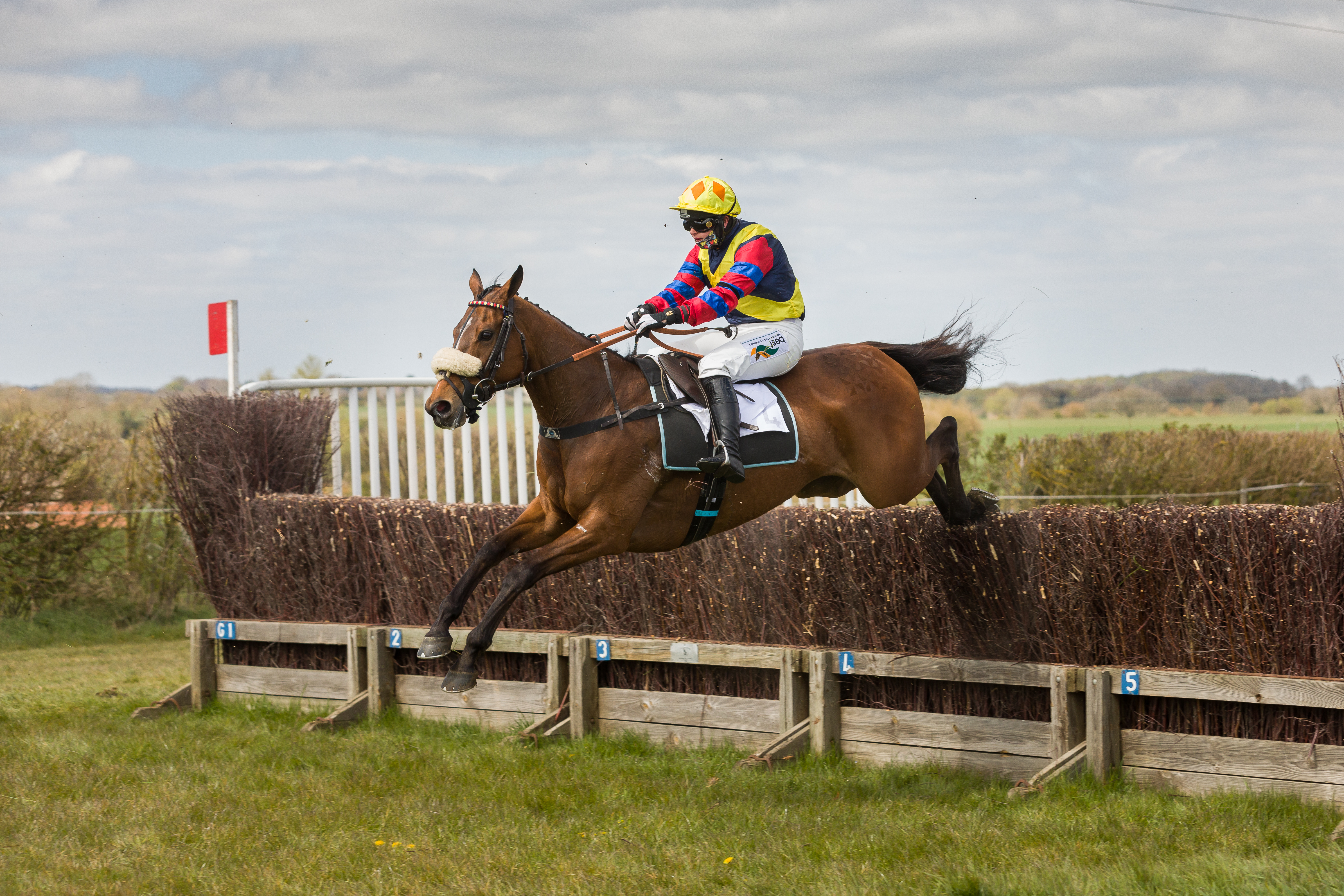 FOX VALLEY and GINA ANDREWS in command in the Conditions race

Jockey Alex Chadwick had a weekend of success to remember winning in Wales ( Chepstow Hunter ‘Chase), the Midlands ( Garthorpe) and here in deepest Essex, over the last three days. Alex’s first post-race comment after this latest success  “I think I might buy a lottery ticket !!”  His mount, Fiddler Of Dooney, justified Newmarket trainer James Owen’s continued faith in the 8yo when winning the opening Restricted race. The partnership owned gelding appreciated the top of the ground conditions and will now probably remain competitive in point-to-points although an entry in a hunter ‘chase is also a possibility.

FIDDLER OF DOONEY ( No. 2 ) and ALEX CHADWICK on their way to victory in the Restricted race.

The reduced East Anglian season has concluded but hope springs eternal for a normal resumption of a full season’s racing, in the area, starting from mid- November.

ALL PHOTOGRAPHS BY COURTESY OF GRAHAM BISHOP