Point-to-point racing in East Anglia finally made a delayed start to the season, with this meeting at Higham. Traditionally this Easter holiday fixture overflows with a huge crowd but due to the government restrictions, only participants and officials were able to attend.

The meeting was streamed and expertly hosted by Derek Thompson and Bob Champion CBE. It was therefore possible, for those who would normally attended this popular fixture, to be able watch all the day’s action from the comfort of their favourite armchair.

It became an unforgettable day for sixteen year old Will Featherstone, who rode his first winner on Minella Beat in the PPORA Members Novice Rider Mixed Open race. Will had been a successful participant on the East Anglian pony racing scene, over many seasons, gaining masses of experience in race-riding. Will rides out regularly at Jamie Snowden’s professional yard and Minella Beat is a recent family acquisition, owned and trained by Will’s mother, Catherine, The 8yo had unfortunately suffered from broken blood vessels, when trained under rules by Snowden, but there was no repeat, here, of that particular condition. The partnership led all the way, with the only concerning moment came when Will lost his irons at a fence in the straight. The partnership, the outsider of three, went on to win comfortably with the runner-up, the favourite Fifty Shades being subsequently disqualified for losing a weight cloth, during the race. This was Will’s fourth mount and he was delighted with his achievement but Mum, Catherine can still boast a better record having ridden her first point-to-point winner on Ballad, at Horseheath in March 2003, on only her third ride !! 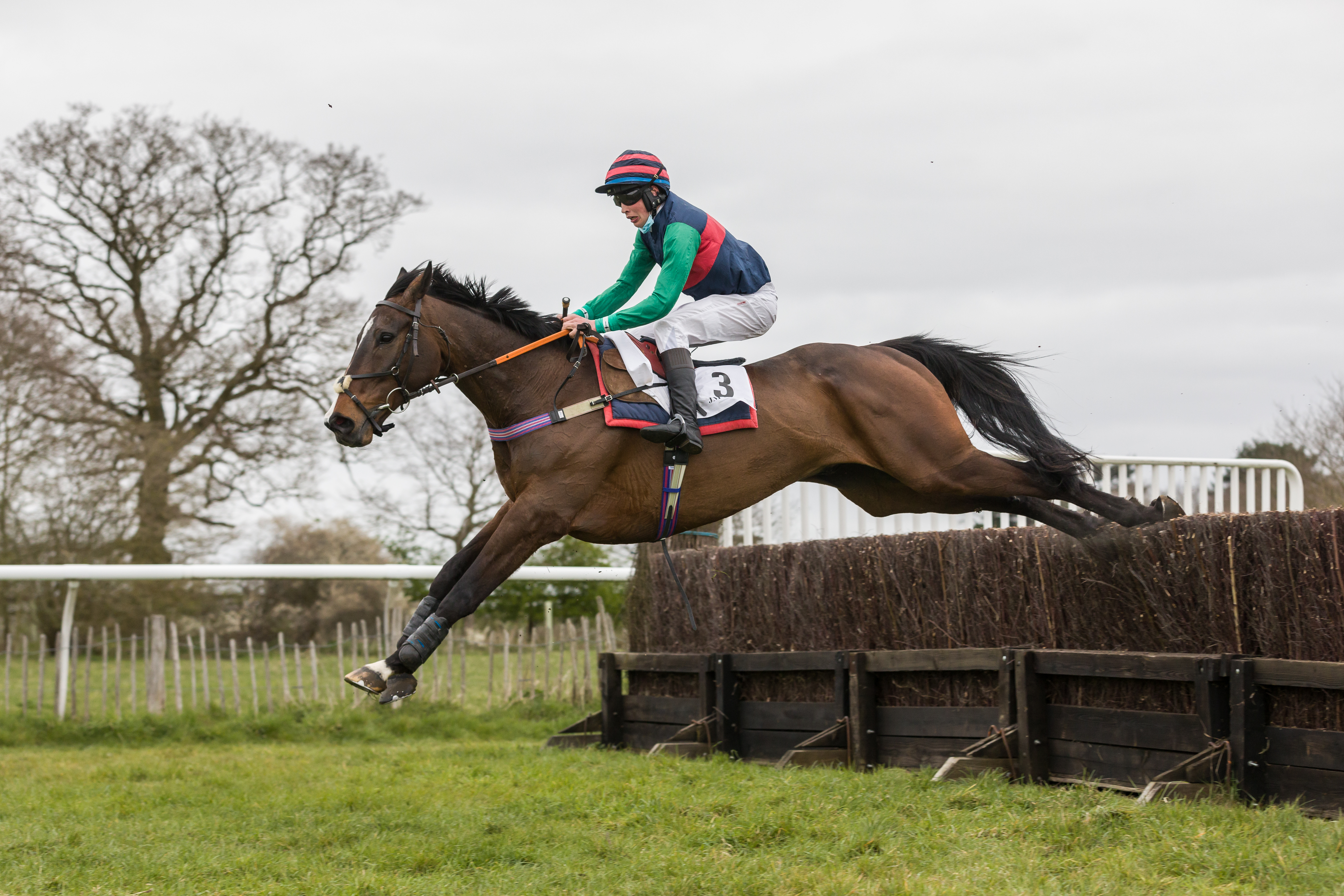 Will Featherstone and Minella Beat on their way to victory in the Novice Riders race.

Current national lady champion, Gina Andrews, also learned her skills on the pony racing circuit and made her only ride of the day, a winning one, on the mare Fox Valley, in the Conditions race. The pairing made full use of the 12lb weight advantage, to repel the determined finish of the favourite, Steeles Terrace. Gina, who with trainer, husband Tom, have made a scintillating start to the resumption of point-to-point racing this week, moved her mount ahead four fences out and they led going to the last and held on by a ½ length, with Lords Park Star a further length behind. 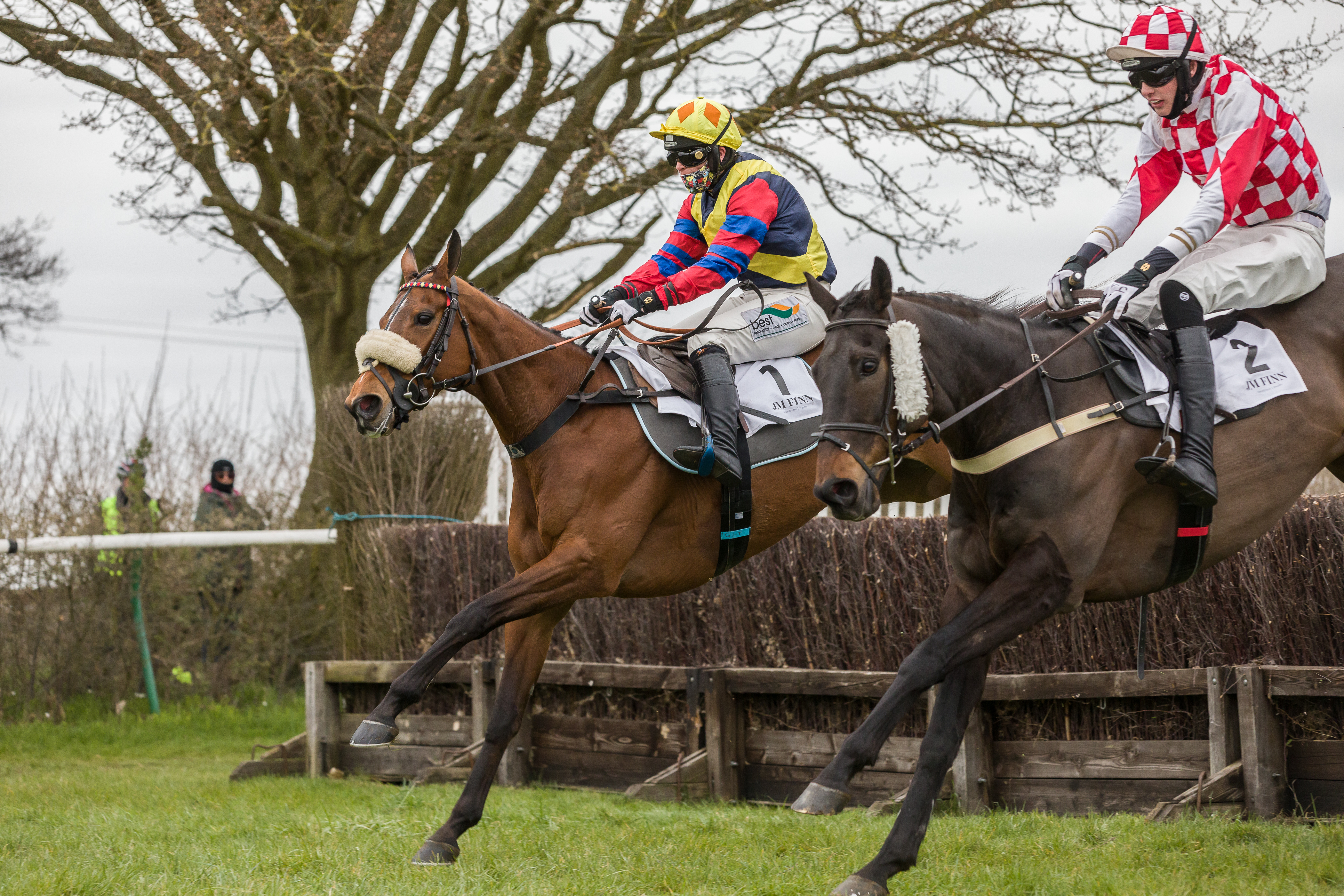 Fox Valley and Gina Andrews (left) the winning partnership in the Conditions Race.

The Mixed Open went to Southfield Theatre and Lily Bradstock who finished alone to record another course win, after their triumph in February 2020. Here the partnership led from the start and were 10 lengths up going out on the final circuit. A mighty leap at the final open ditch settled the issue with their two rivals eventually pulling up, leaving Southfield Theatre and Lily to complete the course, in splendid isolation and claim the prize. 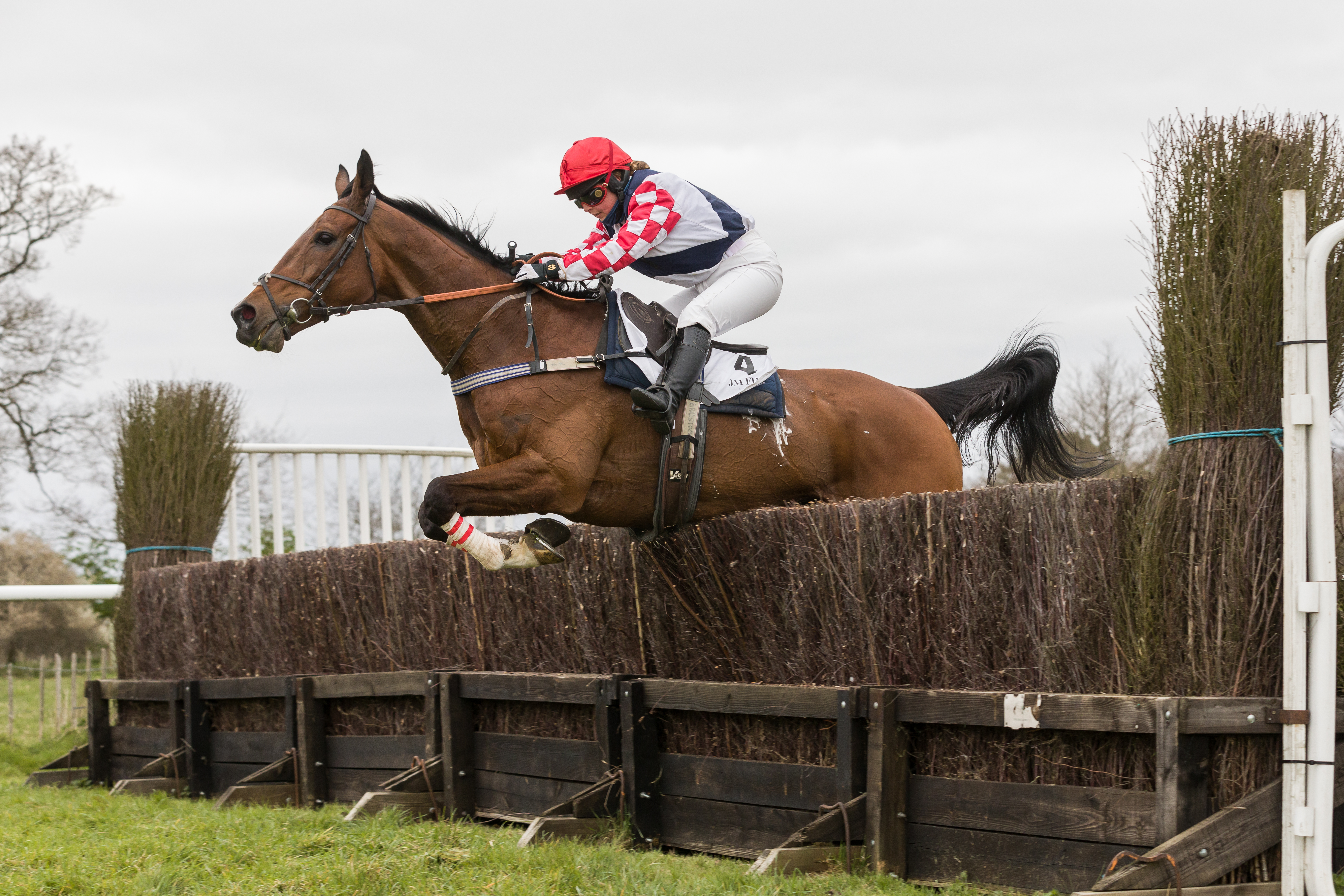 Making his first visit to Higham, jockey James King landed a double with wins on Ahead Of The Game and Thumb Stone Blues with the former coming from a long way off the pace to win by 8 lengths in the Maiden Conditions race. They bided their time during the race and were some 30 lengths behind the exuberant jumping No Gale, going out on the final circuit. James was content to keep his mount “switched off and as a result he was jumping better and the good pace to the race was also beneficial”. 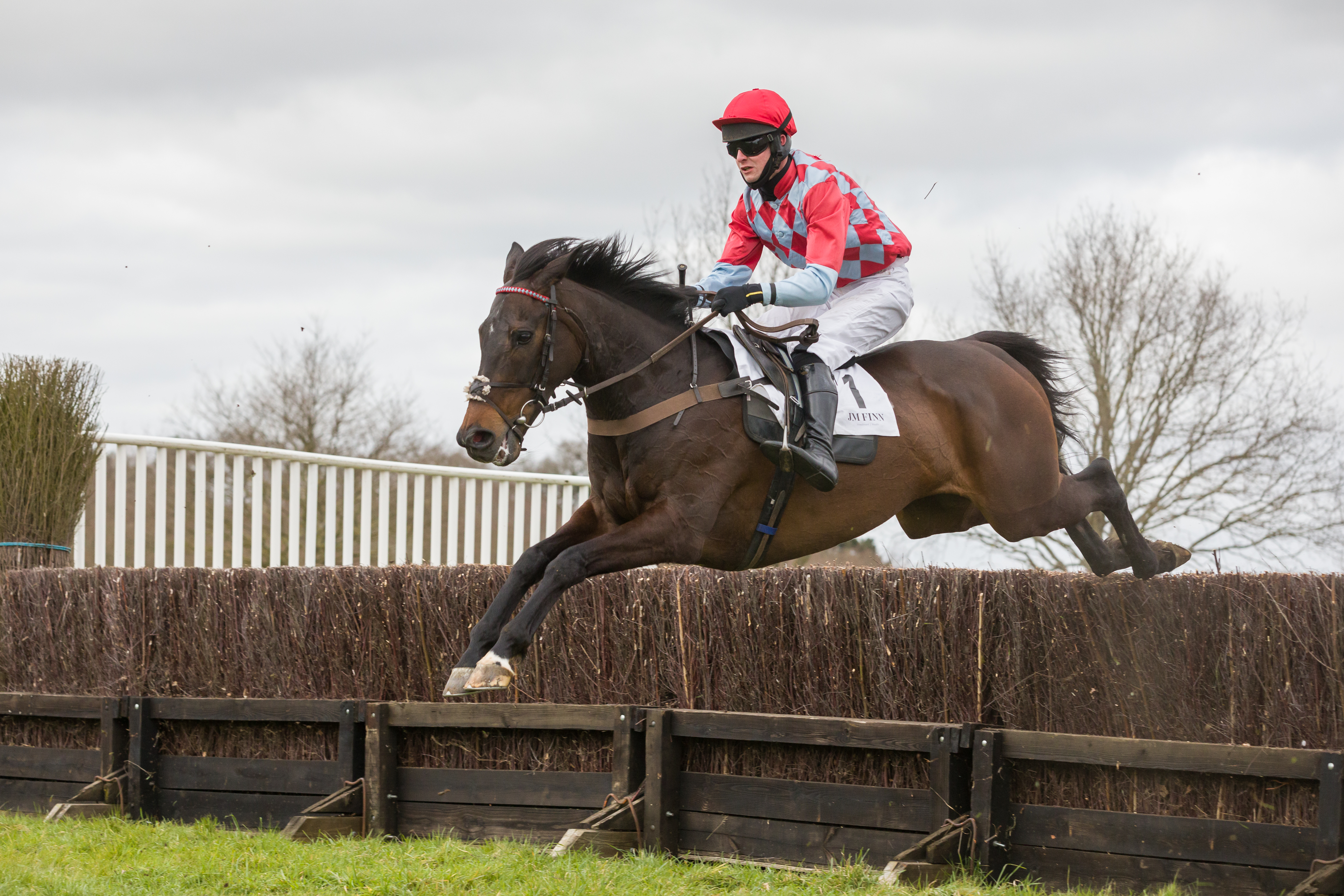 Ahead Of The Game gives James King his second winner of the meeting.

Thumb Stone Blues triumph, in the opening Retraining of Racehorses & Jockey Club Veterans Horse Conditions event, was also a milestone for James as it provided him with his first training success. Based in Warwickshire, point-to-pointing has always been James’ passion and his dedication to the sport, will provide him with many days of success, in the future. Here Thumb Stone Blues was always in command over the final three fences and the runner-up, Mercers Court, never really recovered from an error seven fences out and the final winning margin was 3 ½ lengths. 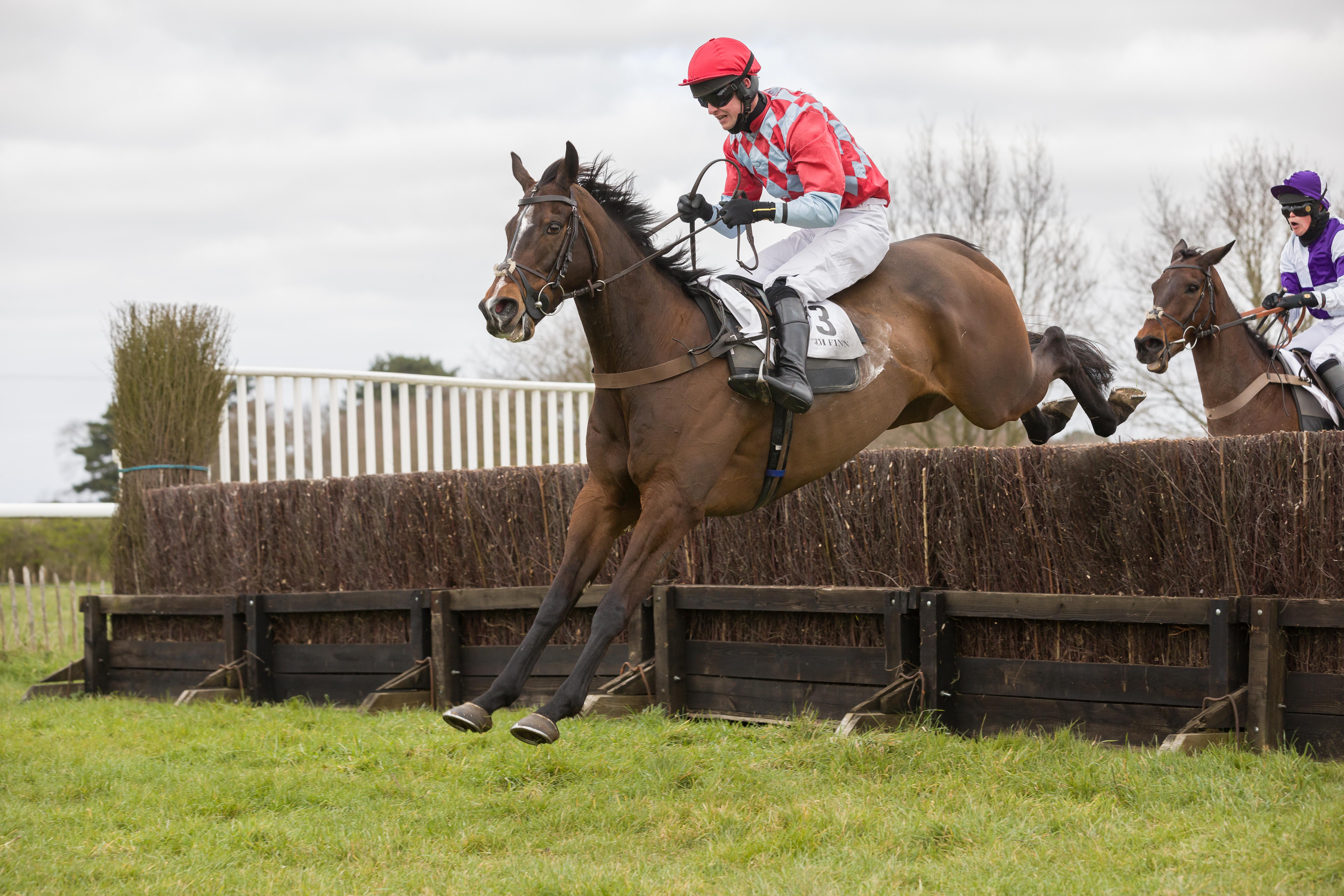 Thumb Stone Blues provides James King with his first winner of the day.

We witnessed a very impressive performance from Takoda, ridden by Tristram Durrell, in the Maiden race. Droitwich trainer, Max Young brought this 5yo, to Higham, with high hopes and his confidence was not misplaced with a 20 length victory. Atigun Pass, with Jack Andrews aboard, led from the start and was still up to ten lengths clear when entering the final circuit. However Tristram and Takoda always had the leader in sight and after jumping upside them, three fences out, ran on strongly for a promising debut and in the fastest time of the day, Takoda appeared to pull up lame and Tristram quickly dismounted but it proved to be nothing of note and Takoda was thankfully, sound and fine for the journey back to Worcestershire. 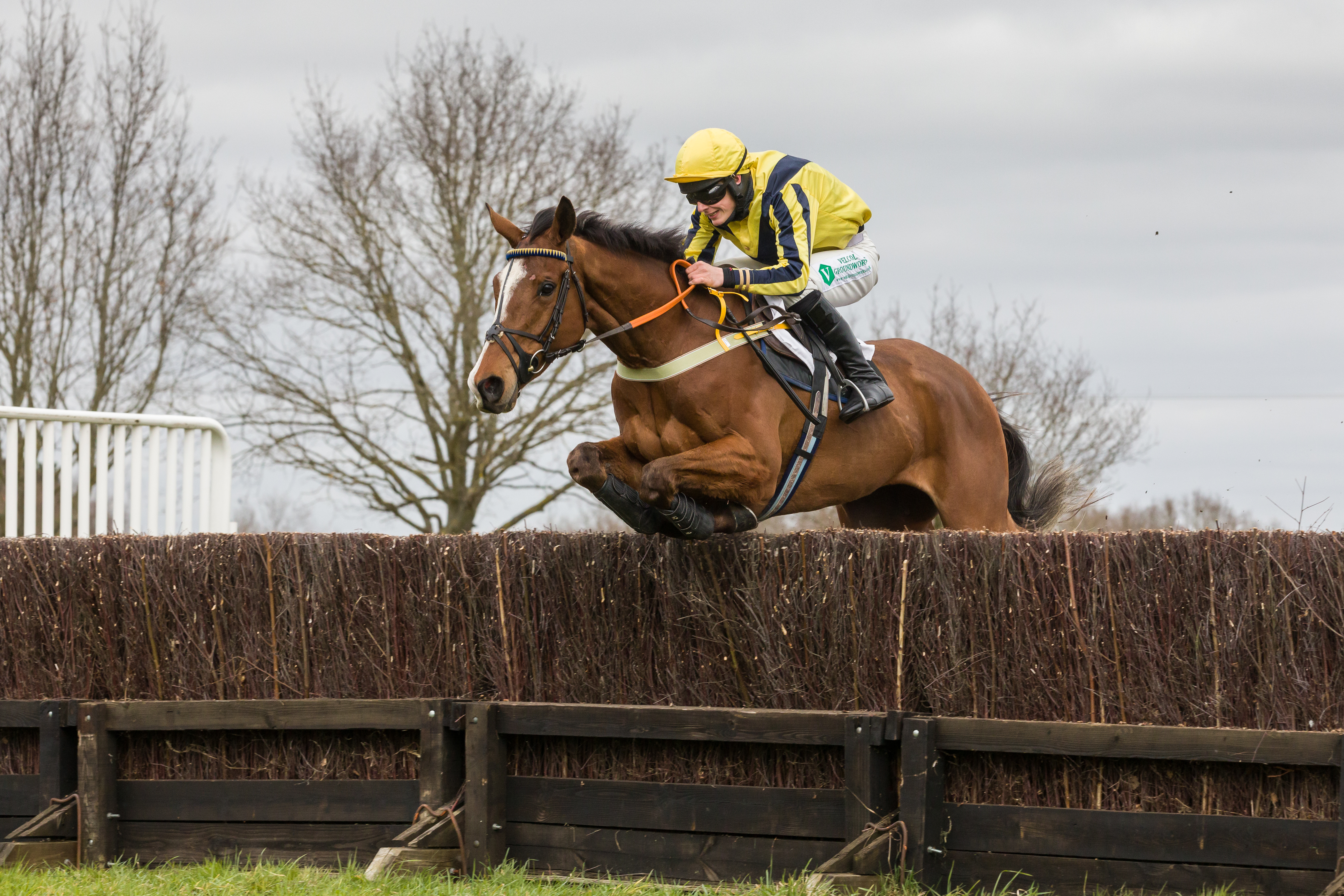 Takoda and Tristram Durrell were impressive winners of the Maiden race.

The day concluded with the customary Higham winner for the Pennock stable from Timworth, near Bury St. Edmunds when Laser Beam recorded his third course win, under a confident ride from Sam Lee. Sam, who was making his first visit to the course, was able to take control of the race, at the cross fence, 4 fences out and guided Laser Beam home, hands and heels, 2 ½ lengths clear of their nearest rival, the favourite Getting Closer, at the finish. 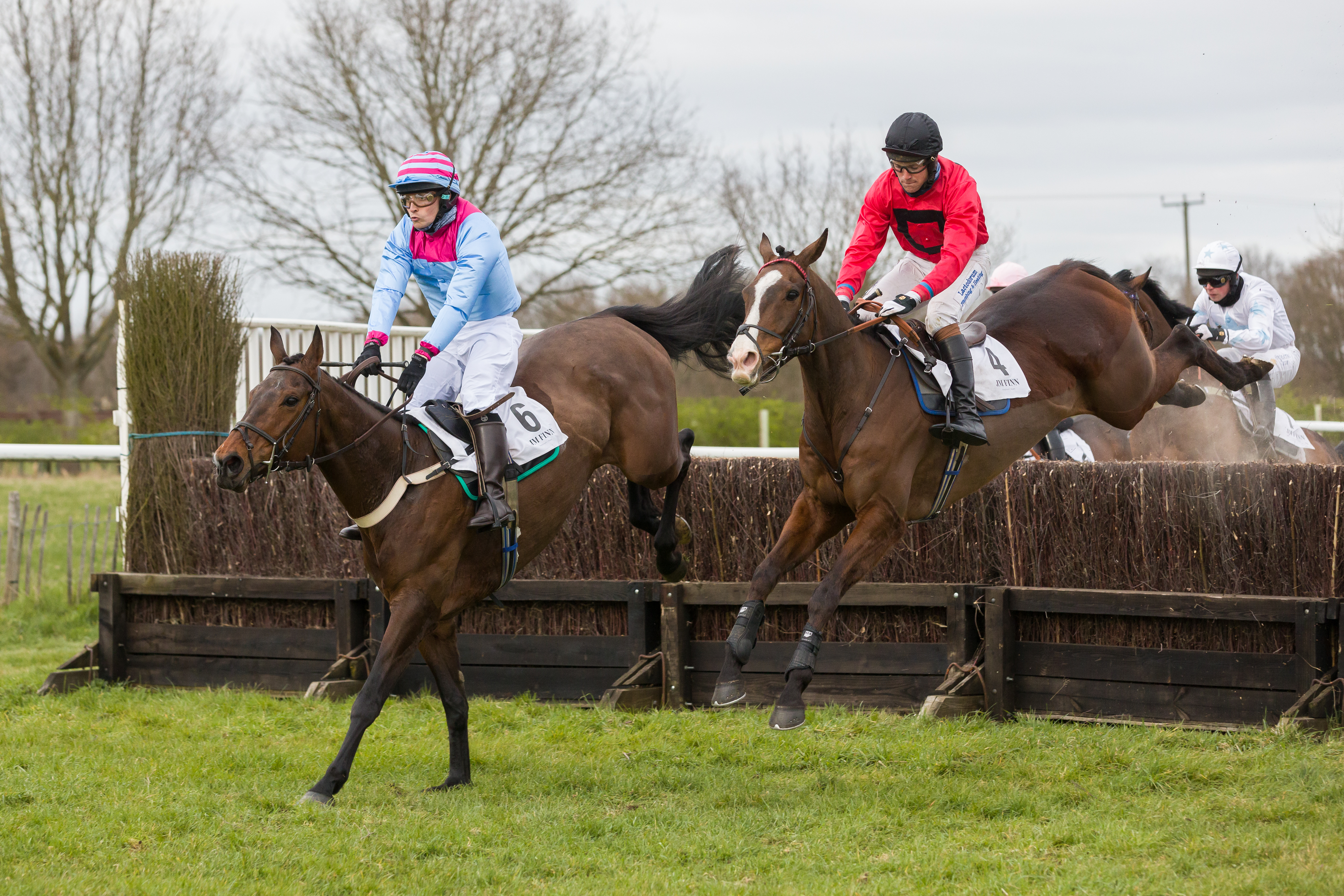 Unfortunately the rule of six didn’t apply to all the races but nevertheless there were 31 runners on the day, with only two missing from the original declared number. Peter Wright CEO of the PPA was making and enjoying his second visit to Higham and also in attendance was Peter Aldous MP for the Waveney constituency in Suffolk. Obviously, the meeting was a different experience without the paying public but full credit goes to the organisers for a smooth run afternoon, whilst observing the required protocols.