Racing returned to Ampton after nearly two years, on a fine winter’s day, with a cracking meeting which was fully appreciated by the above average attendance.

Tom Ellis, the Warwickshire-based trainer, sent out three winners, although Tom himself was attending the Alnwick meeting where he saddled two further runners into the winners’ enclosure. Sam Davies-Thomas was the man in charge of the Ellis’ runners and would have been pleased with the number of winners he oversaw on the day.

The Maiden race saw Master Templar and Will Thirlby start the winning sequence for trainer Ellis when seeing off eleven other rivals with a well-timed challenge and being 5 lengths victors. The pairing were always handy and shared pole position during the race mainly with Megaboost, who showed improved form, whilst the favourite, under Will Biddick, was never far away but always chasing the leaders. Master Templar saw out the closing stages in fine style after Will Thirlby just needed to offer him a ‘ squeeze which brought him straight back on the bridle’. Will has been riding and schooling the horse at Tom’s yard and was confident enough of his chances to cancel a skiing holiday to be able to partner the 7yo. Any direct celebrations, after the win, were sensibly put on hold as Will was booked in for his HGV driving test on Monday.

Tom Ellis’ two other training successes provided Natalya Irvine with her first double of her career initiated by Blazing Tom, in the Ladies Open. The 11yo was recording his fifth straight win with four registered last season, after the odds-on Back Bar pulled up after two circuits. Alan Hill the trainer of the favourite was bemused as anyone for the abject performance “No excuses. We’ve had him checked over by the vet and everything seems fine. Izzie did say, however, he just didn’t give her the same feel as she normally expects from him”.

In the race, Natalya was content to keep Blazing Tom behind Back Bar, who lead the contest until starting to lose ground after two circuits. After the favourites departure the remaining rival Killiney Court and Michaela Tallett, to their credit, matched Blazing Tom and they jumped the third last in unison but a mistake at the penultimate fence handed the advantage to the Ellis representative and the judge assessed the final winning distance as 9 lengths. 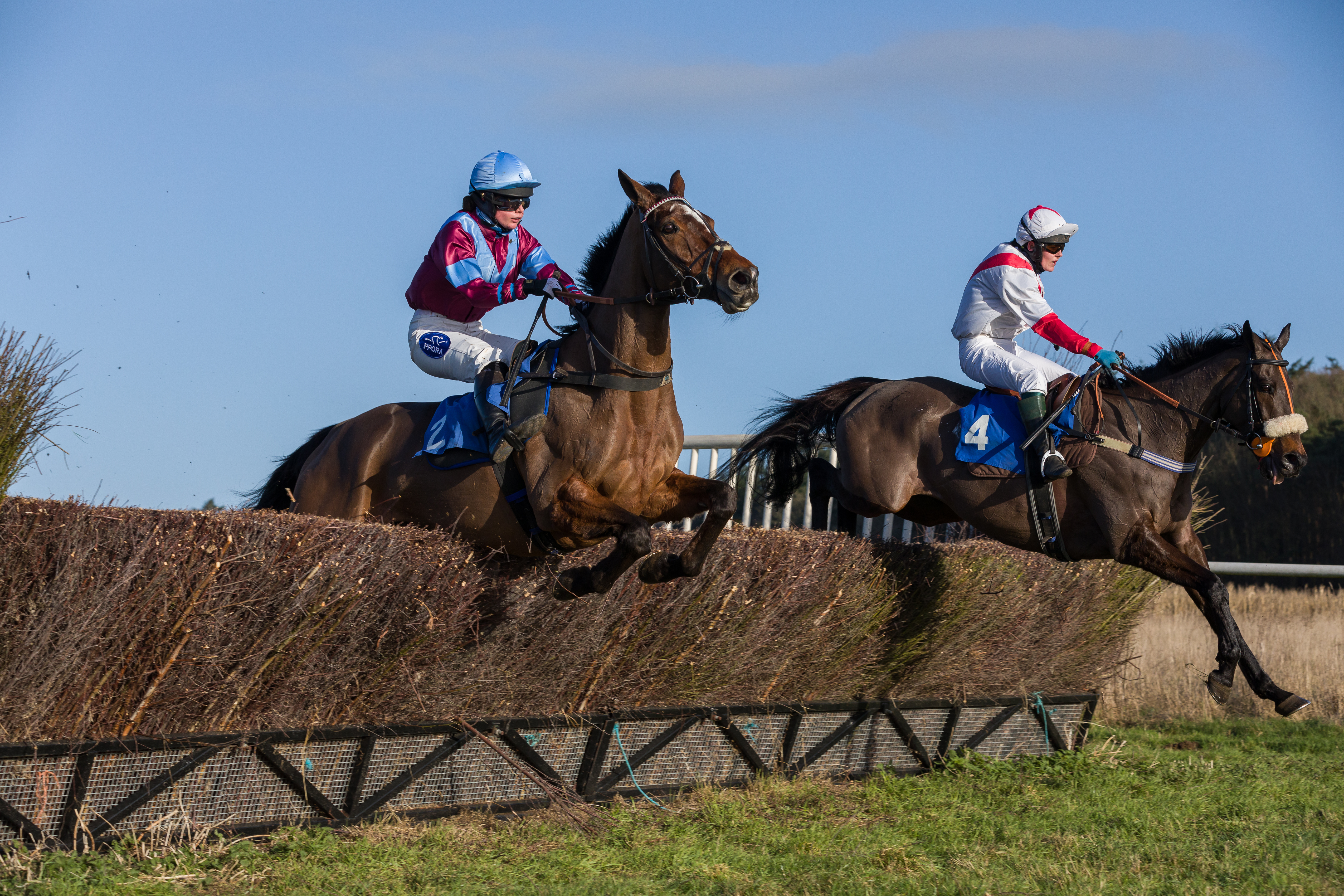 Natalya, who is based with the Tom and Gina, is gaining more experience with every day at the yard and that is evident in her race-riding and her partnership with Blazing Tom has been the highlight of her career to-date but there is another important person in this success story, that of Meg an special groom at the yard, who is vital part of this winning jigsaw.

In the concluding PPORA Novice Rider contest Natalya rode her second winner of the meeting on Fox Valley. This honest mare is owned by the Signy and Marriage Families who were delighted with this seasonal debut but her racing record shows she always runs best when fresh. The partnership challenged two other rivals off the final bend and these three horses battled it out, over the final two obstacles with the winning distance being 2 lengths. In a day where some great action had been witnessed this culminated in a particularly close tussle with Earlshill and Occupied and the winner all locked together over the last fence. What a race to finish the day and what an experience for these young novice riders. Take a bow Lucy Burton, Toby Steele and the ultimate winner on the day, Natalya Irvine. 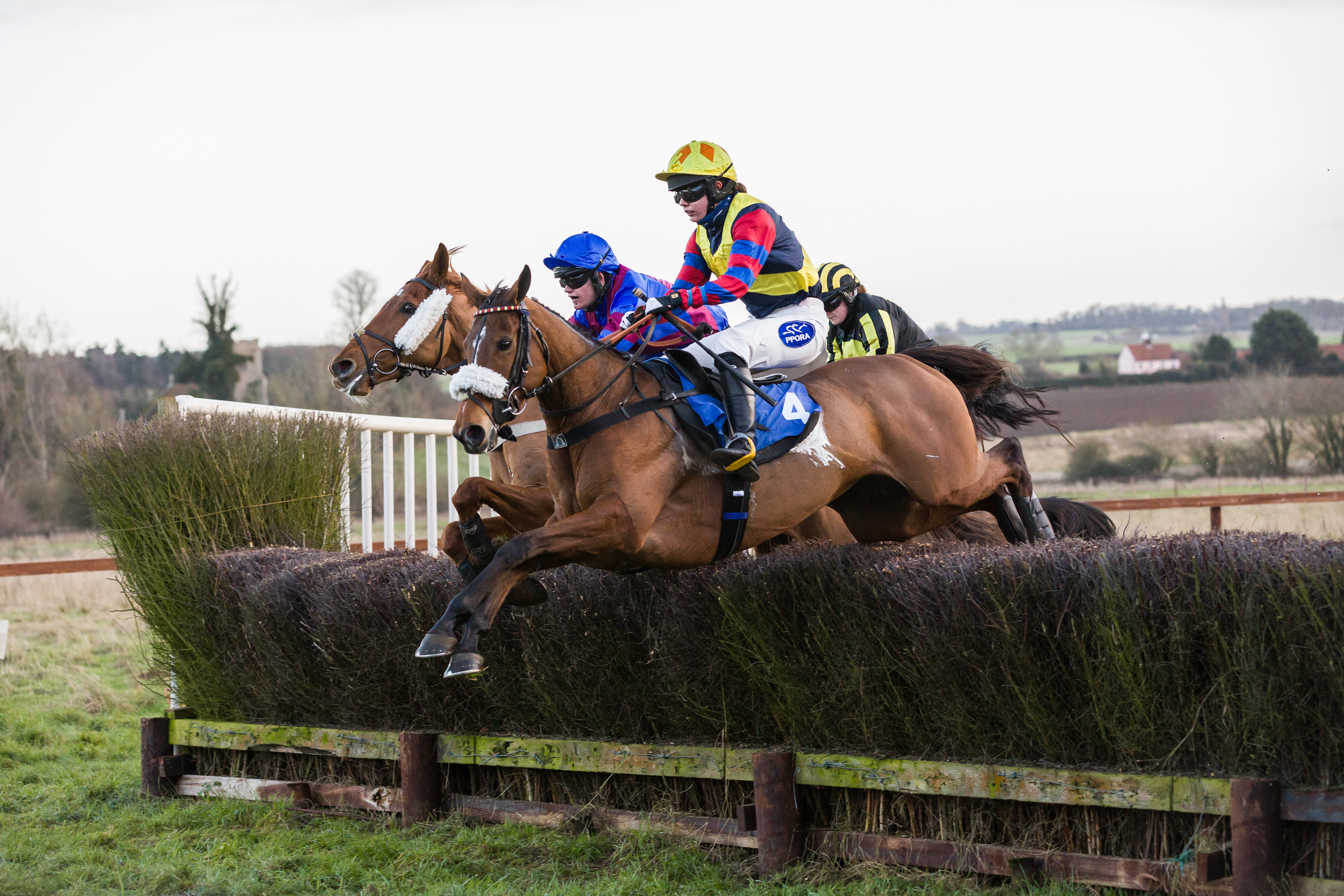 FOX VALLEY and Natalya Irvine (nearside) just get the better of their close rivals in the PPORA Conditions Race for Novice Riders.

The Irvine family were there to offer their dedicated full support. Mum, sister and Dad, who owns Blazing Tom, were all up early and on the road from their home in North Yorkshire. The photographic evidence of the day’s achievements will offer forever memories especially as Blazing Tom runs in mainly maroon and light blue colours associated with Burnley Football club, the team that Natalya’s Grandad has supported all his life.

There were also two successes from the East Anglian region for the local enthusiasts to cheer home. The first local East Anglian trained winner came courtesy of Tullys Touch, in the Mens Open, who again excelled on a course where he has now won on all four visits. Trainer John Ibbott based near Halesworth made the excellent decision in booking the experienced Will Biddick, for the ride, who made his first-ever visit to Ampton a winning one.

Having used Gina and Jack Andrews for past seasons John’s dilemma was eased when Gina suggested the possibility of Will’s availability. Will himself had decided to give the North Cornwall fixture at Wadebridge a miss and had been on the telephone in the attempt to arrange some rides in deepest Suffolk. With Will’s availability, Gina’s advice and trainer John’s need for a top jockey the whole thing came together with the perfect result. In the race, Diplomate Sivola was sent on by Ben Sutton, who had started the day with a winner, and the partnership pushed on going down the hill for the final time. In this race and the Ladies Open all obstacles were jumped, after earlier and later contests were affected by low sun and ground conditions, resulting in certain fences being dolled off. Tullys Touch  and Mr. Biddick coolly stamped their authority on the race from three fences out and the final result was never in doubt from there, with the winning margin being 3 lengths. John continues to assess Tullys Touch as the best horse he has had in his training care and was confident the 9yo was showing him and his wife Melanie that fitness-wise he was spot on with the only concerns being the ground before and beyond the open ditch “which he hates” explained John. So another Ampton success on Tullys’ CV and he probably heads to Horseheath for his next outing, at the end of the month.

Rob Cundy trains at Semer near Hadleigh and saddled Castle Trump to follow up his 2 ½ mile Maiden race victory at Charing, last month. Alex Chadwick had the winning ride there and teamed up again and the pairing was never headed, securing the Restricted race by 15 lengths. Outlaw Dream was made favourite who also won at Charing at the same meeting but over a 3 mile distance but was stone last and being pushed and cajoled by Ben Bromley from the early stages. Meanwhile upfront, Castle Trump, sporting cheek-pieces on this occasion was jumping efficiently and setting a strong pace and this proved decisive to the overall result. When suggested to owner Charlie Buckle that he and trainer Rob had found the key to this ex-Irish import his immediate response was “No it was putting Alex in the saddle rather than myself, as I kept falling off him !” Probably not far from the truth if assessing Castle Trumps form before this season which was UFF. Charlie added that the horse has been very immature for an 8yo but is delighted he is now proving to be an exciting prospect for the remainder of the season and beyond. 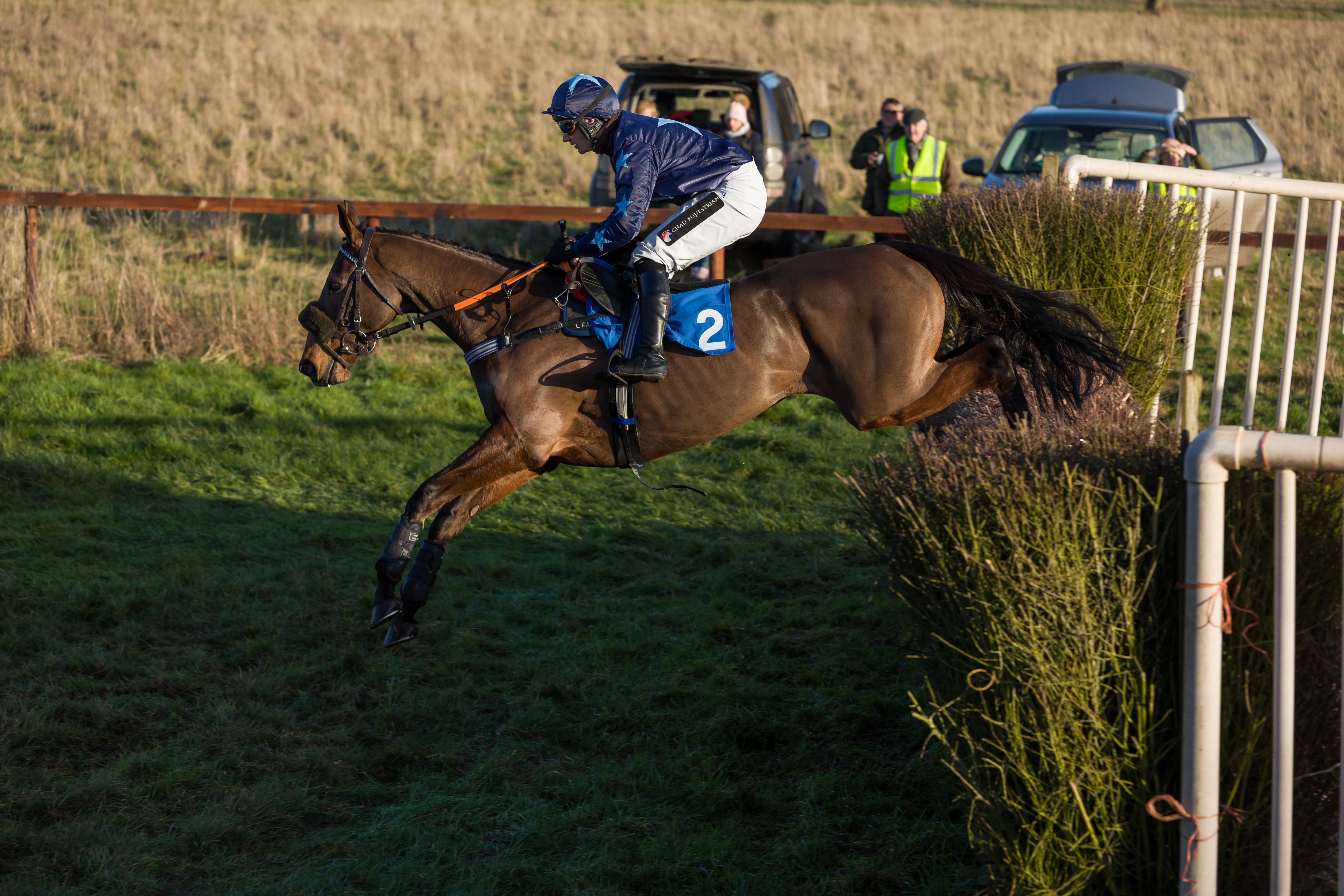 CASTLE TRUMP and Alex Chadwick put in a fine leap at the penultimate fence.

The opening Veteran Horse contest witnessed 14yo Sir Mangan, trained by Alan Hill, make light of his years when providing, the owner’s son, Ben Sutton with another success after their five wins together last season. The winner took up the running going out on the final circuit after Trojan Star had led the field of six initially and was always in command, to repress any challenges. The pairing’s closest rival, at the finish, being Wounded Warrior who was 1 ½ lengths behind the winner and Knight Batchelor was another 12 lengths back, in third place. The winning jockey Ben was landing his first winner of this season after securing the Novice Male Rider’s title with eleven winners last campaign. Ben is currently enjoying life riding out for the Hills and considers Sir Mangan an “absolute legend, who was pulling me round the yard yesterday”. All the right signs, without doubt, of a horse thoroughly enjoying life although he is approaching the half century of races in his career and with this win has now won seven points from twelve starts. 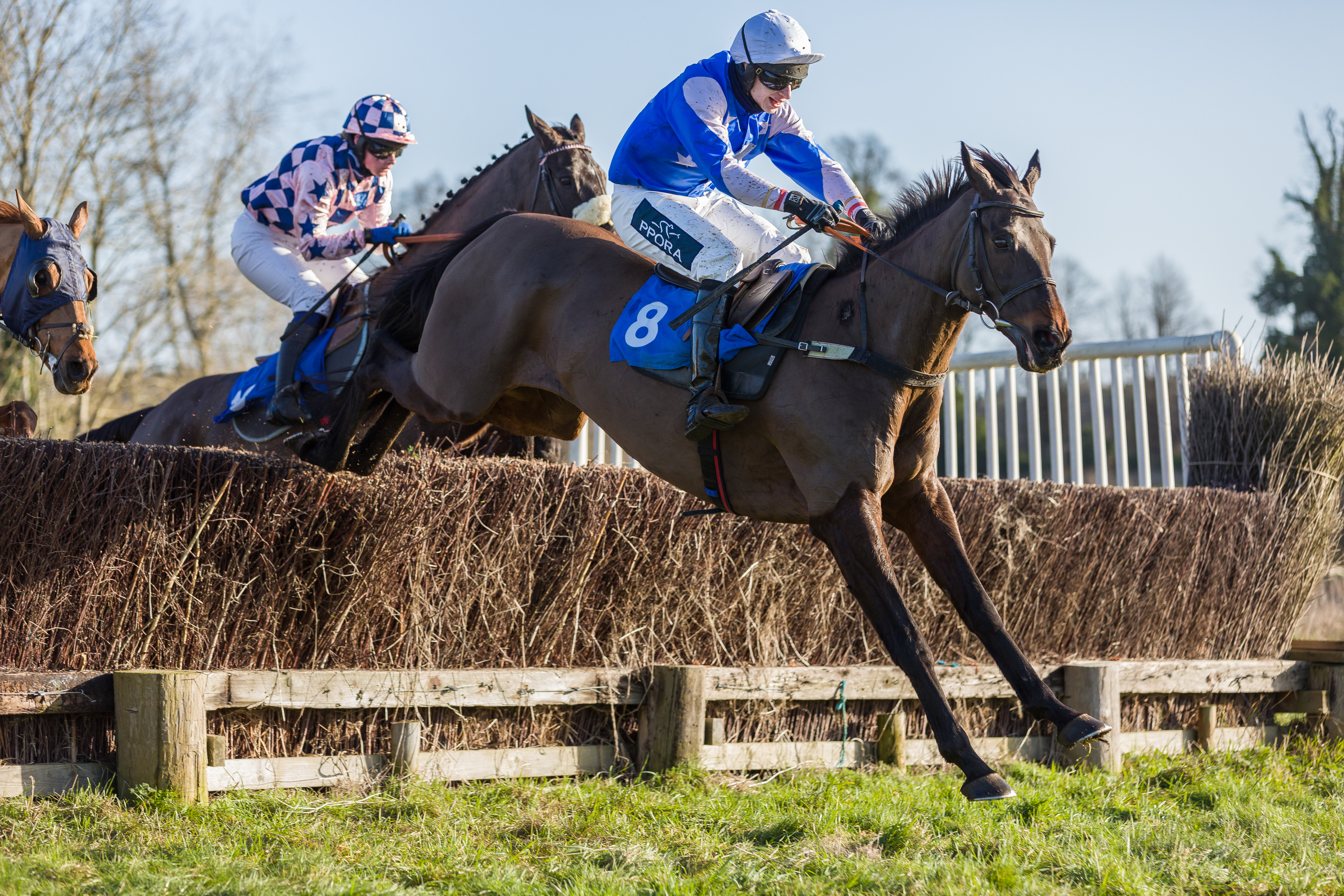 SIR MANGAN and Ben Sutton on their way to victory in the Veteran Horse Conditions race.

The two meetings held in East Anglia over the last ten days have been a credit to the organisers and enjoyed tremendously by racegoers, which augurs well for the future.