NEED A BREAK FROM THE NEWS: ISSUE 2! Hear From The Pub Team’s Tony Winchester On Why On Earth He Got Involved In Pointing!

Did you get involved in pointing?!? 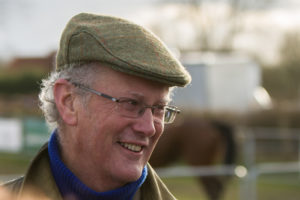 I’m Tony Winchester a long-standing member of the Pub Team.  On 6th October 1947 I rocked up in a Nursing Home in Welwyn Garden City, a son for John (Area Manager for Shell Mex & BP Ltd) and Joan (a ballerina and owner of the Joan Mary Evans School of Dancing), and a brother for Sue.  Horsey background clearly nil, with the exception that my father was an enthusiastic follower of the Sport of Kings and Sue used to ride a bit and, through that link, my parents became great friends with local vet Keith Buckler and his wife Kay – who introduced our family to pointing.

Hardly surprisingly, as I am led to believe, I was pushed in a pram around Friars Wash point-to-point course where the Hertfordshire Hunt held its annual meeting and so presumably there the seed for my enthusiasm was born. Frankly, I’m not sure if I went regularly as an infant, my memory is pretty hazy about matters done five minutes ago let alone 70 years ago, but certainly, when my folks moved to Hampshire I remember outings to Larkhill, Hackwood Park, Pitt (Guy Harwood’s colours left a lasting memory), Lockinge, and of course Tweseldown.  For some of this time, I was at boarding school where I developed my love of tennis and football so as I got older racing played second fiddle to my love of other types of sport.

My parents then moved again to Cornwall which introduced me to courses at the Royal Cornwall Showground Wadebridge, Tehidy and occasionally Buckfastleigh where I had my biggest winner. Such was my excitement my parents introduced social distancing there and then (they were clearly ahead of their time) – they did not wish to be seen with a young lad jumping up and down like a raving lunatic.

In 1967 just before my 20th birthday I moved to London to take up employment with Lloyds Bank – pointing definitely took a back seat as soccer and tennis dominated my life and two spells in the Territorial Army (H.A.C. and to many, surprisingly, the Intelligence Corps!) hardly helped.

In 1970 an appointment to one of the bank’s training centres saw me based very close to Tweseldown so, when time was available, the pointing juices started flowing again.  By this time my parents were living in Bradford-on-Avon at a property which they named “Larkhill” – I wonder why? This part of my life saw me venturing to Sussex for my racing; Penshurst, Parham and Cowdray Park.  I regularly dragged Jan along but sadly she would rather watch paint dry, but did enjoy the picnics!

We married in 1975 and named our first house “Tweseldown” – we did live in Guildford and this was our nearest course but it was only a three bedroomed terrace house so naming it in the first place was somewhat pretentious!  I was still playing soccer for the HAC so the winter weekends were very busy with a combination of soccer and racing – thankfully at that stage no kids!

In 1977 Jan and I moved to Danbury in Essex, and in 1979 our son Russell was born. The move was due to my promotion to a position in the Marketing Department for Access (who remembers “Access – Your flexible friend”).  It was here that my pointing enthusiasm really took off. One lasting memory was at the nearby course of Beeleigh where one of the runners unseated its rider and ran amok in the car park. Amongst the cars damaged was my new Triumph 1500 – I heard the commotion and turned round to find the horse astride the bonnet of my new car! The organisers, whilst sympathetic, reminded me in no uncertain terms that you go racing at your own risk!

In 1980 we moved again to Bishop’s Stortford and in 1984 our daughter Hannah was born. It was in Stortford where I met a guy called Peter Riley who introduced me to fellow agronomist David Nichols and a friendship was born which really enhanced the pointing experience and meant that, as my body gave up on the football, pointing took over my life.  David is one of East Anglian pointing’s greatest assets – an unsung hero who currently runs the Pub Team but in those days lugged a mighty great board around the country for display at each of the meetings with an update of the successes of riders and horses. Thank God for the Internet!  In 1998 another development – through a mutual acquaintance I was introduced to Brian Dowling.  Brian has cost me more money than anyone else I know – we would regularly bump into each other at points and one day Brain said: “it’s time you had a horse”.

Later that season I was introduced to Alex Harvey, who was based near Bishop’s Stortford, and who sold me one-third of “You Can Quote Me” which at that time was owned by Alex himself and Michael Johnson.  In terms of ownership, I then had bits and pieces of various horses for the next twenty years. I’d like to thank everyone who has filled my life with joy, Alex Harvey, Angus and Sam Hodge, Katie Thory and Martin Ward, who have all done their best to find me winning horses.  “You Can Quote Me” at High Easter was my first winner, sadly I was working in Paris and missed the race.  David Nicholls’ racing commentary over the phone remains with me to this day! Next, after some time in the wilderness, under Katie Thory’s guidance, the “The Legal Limit” won at Garthorpe.  Martin Ward then delivered three winners for me of which Banksandditches, a winner at High Easter and Fakenham, was the star and we also had a win with Violet Crack at Dingley.

Perhaps my greatest sadness was the efforts of Angus and Sam Hodge who tried really hard with a lovely horse I owned by the name of Manhatton Storm.  We pointed him for three seasons but during that time he always seemed to come across one too good as the finishing line approached. Despite being ridden by some of the best on the circuit, Nibby Bloom, Alex Merriam and Sam herself, we just could not get that horse to win, but that’s racing.

In the meantime, during the season, I was now writing weekly pointing reports for a number of local rags although, as the years passed by I found it increasingly difficult to get my articles published. I also took on a role as one of the Fence Stewards at Horseheath for the Puckeridge, something I have done for the best part of 15 years and will continue to do as long as I am able.

On the downside, I’ve had to give a vet permission to euthanase one on the course, had one die on the slab at the vets and had a number that never made it to the pointing track – but when you win all the bad times disappear and for a few days you walk on water – I’m no JP McManus, just a bloke who enjoys pointing, the friendship, the banter – it’s just fun and I’ve enjoyed it all the way.

In 2014 on my 67th Birthday, our daughter bought me a trial riding lesson – I went to the riding school for two years and really enjoyed it – I particularly liked it when the instructress shouted out at me “Tony how many times do I have to remind you, you’re not Frankie Dettori” – who knows what would have been had I ridden as a kid!

Now I’ve got a share in a NH horse – this is my second such “investment” but is it as much fun as pointing? Probably not, but I’ll persevere for a couple more seasons and then probably drift back to pointing ownership when the time is right.  Whenever I see Brian Dowling, I think to myself maybe I should tot up what I’ve spent on racing over the years and present him with the bill – but the good times certainly are worth the pain and the costs.  Deep down, I truly thank Brian for pointing me in the right direction!